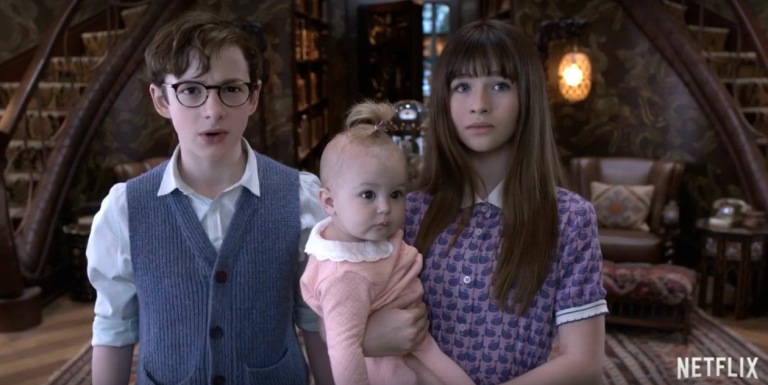 Too Good to Look Away

On January 17th, Netflix released the first season of the highly anticipated show A Series of Unfortunate Events. Avid fans of the original book series were overjoyed, having grown up with the story. Since the books were originally written and published in English, the tale of the Baudelaire orphans is not one that many francophones know about. That being said, I have to admit that I never read the books which inspired the TV show. Nonetheless, I loved the first season, even if my only previous experience with the literary classic was watching the 2004 movie.

The three protagonists Violet (Malina Weissman), Klaus (Louis Hynes) and Sunny Baudelaire (Presley Smith), were amusing to watch in their struggles to escape the clutches of Count Olaf (Neil Patrick Harris). Young viewers will relate to them with ease, as adults frequently dismiss their worries or observations. One especially memorable character who manifests this often is Mr. Poe (K. Todd Freeman), whose stupidity and indifference constantly puts the Baudelaires in harm’s way. He refuses to see what’s right in front of him, and cares more about getting a promotion than the safety of the orphans. The series highlights the selfishness of adults, and demonstrates (without sugarcoating) that sometimes the world will disappoint you again and again.

However, I can safely say that the best part of this show is Neil Patrick Harris’ absolutely amazing performance as Count Olaf. I much prefered his take over Jim Carrey’s crazy portrayal of the character from the film. Harris’ acting abilities brought out both the silliness and the dramatic capabilities of Olaf’s character, fluctuating between funny and menacing. Another notable performance is that of Patrick Warburton, who narrates the story of the Baudelaires as Lemony Snicket.

The set design was great, full of strange and gothic décor. Fans of The Grand Budapest Hotel will be pleased to see a somewhat similar aesthetic in A Series of Unfortunate Events. As for the soundtrack, it fits the style of the show perfectly. The opening credits are very entertaining, and are used to give a short summary of each episode. Harris pleads for viewers to “look away” from this terrible tale.

Overall, the eight episodes that make up the first season are very well done. I cannot wait for the second season, which I’m sure will be just as hilarious as the first. With that said, I strongly recommend A Series of Unfortunate Events, as it’s a ton of fun.