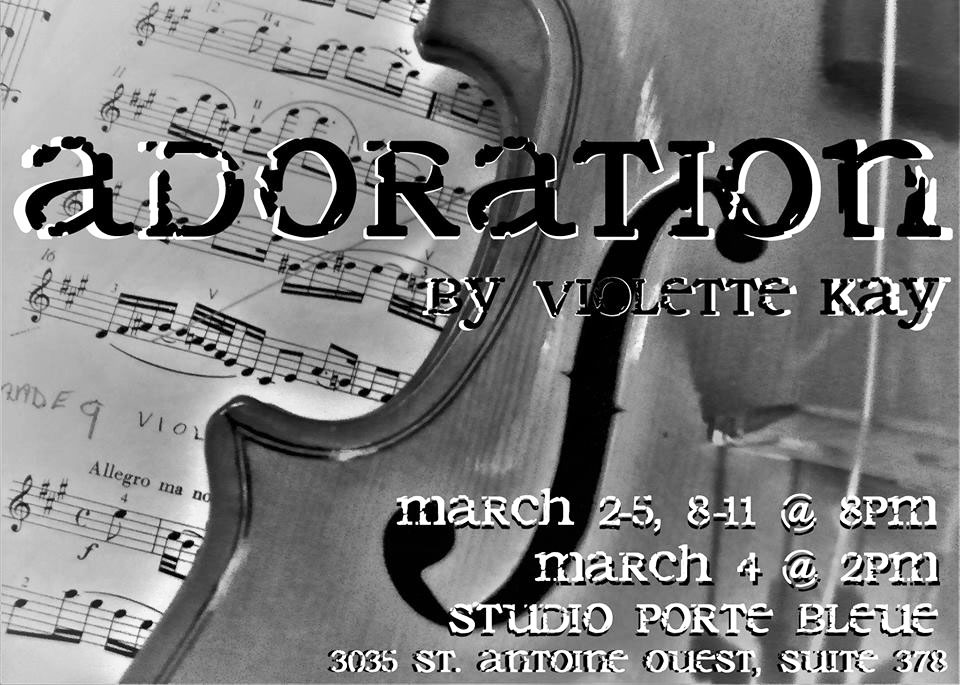 On March 3rd, I had the pleasure of seeing Adoration, written by Violette Kay and co-directed (as well as co-produced) by Adrian MacDonald and Rahul Gandhi. The show was presented at Studio Porte Bleue, as the inaugural event for the new theatre company Tantalus Montreal (co-created by MacDonald and Gandhi). As well as premiering from March 2nd to 12th at Studio Porte Bleue, it will also be running during the 2017 St-Ambroise Montreal Fringe Festival this summer. Many John Abbott graduates are part of this project: Vanessa Schmoelz (Nina), Nick Fontaine (Konstantin), and Violette Kay (writer and musical director). Kate Babin (sound designer) will graduate this upcoming May.

Adoration, a play about the struggles and joys of pursuing one’s dream, is loosely based on Anton Chekhov’s The Seagull. It follows two former violinists, Valerie (Skyler Clark) and Adrian (Nils Svensson-Carell), who reconnect after the suicide of their mentor, Konstantin (Nick Fontaine), recalling how he helped shape their lives as musicians and artists. It is a non-linear play, flawlessly weaving together past and present.

Valerie and Adrian, the two main characters in this play, are portrayed beautifully by Skyler Clark and Nils Svensson-Carell, respectively. The chemistry between these two actors is palpable, and they bring to life the intricate and complicated relationship between the former violinists with surprising ease. The audience witnessed many heartwarming moments between them, as well as a perfect balance between banter and competitiveness. Valerie is a very fiery and tempestuous character, whereas Adrian is the water to her fire.

The other duo in the play is comprised of secondary characters Nina (Vanessa Schmoelz) and Konstantin (Nick Fontaine). Konstantin is a very harsh and seemingly heartless violin teacher, while Nina is a much softer teacher. These two clashing personalities combined with the characters’ age difference makes the relationship unbelievable at first sight. However, Schmoelz and Fontaine make us love seeing them interact.

The cozy and small set added to the comfortable feeling of the play; it was perfect. The stage occasionally went dark before a character was done speaking, which created an incredible, enthralling effect because of the small space and the proximity to the actors. Turning off the spots too early can be risky while trying to keep the audience’s attention, but in this play, it was well done. The sheet music was also a versatile and central part of the play, adding an interesting touch to the set.

Overall, Adoration was an incredible play. It’s a very compelling tale, while also extremely easy to relate to, no matter what background you come from. The characters are lovable, and the chemistry between the actors contributed greatly to that. However, it is hard to imagine this play being performed in a bigger venue, since Studio Porte Bleue seemed perfect for Adoration. It is a must-see play, be sure to check it out this summer at the Fringe Festival!