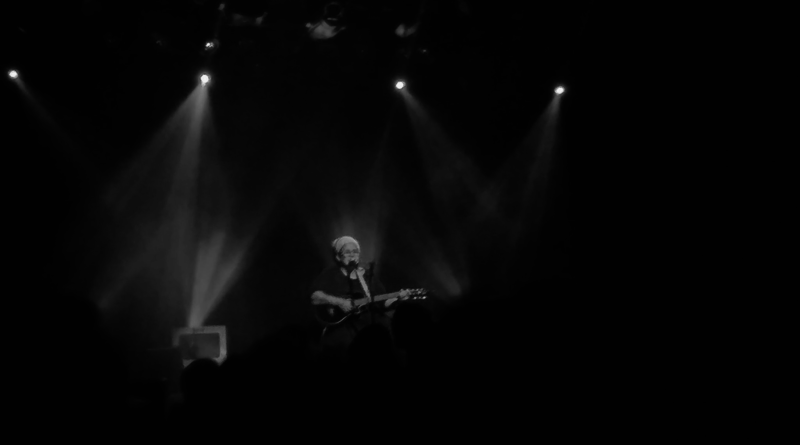 AJJ and Kimya Dawson are two artists I have really wanted to see for a very long time. Their work has really resonated with me, so when I heard they were doing a co-headlining tour and that they were coming to Montreal, I simply HAD to go. This was a night I was not going to miss, and after seeing them, I can safely say, I can die happy.
I found myself at L’Astral once again, after covering another show that took place there earlier that week. As I walked in, I turned to see Kimya Dawson herself at the merch table selling her own merch. She was very open to conversations with fans and she was very approachable. I will admit, I was slightly star-struck, but I was able to muster up the courage and ask for an autograph from her, which she gave very kindly.
The spectacle began with the opening act, Shell Shag, a small punk duo, who really started the show off with a bang. They engaged the audience and performed a wide variety of both personal and political songs. They finished their set by literally building a tower with their instruments and stage props. I spoke with them briefly after their set in the crowd, and they were extremely humble and polite.
Next up was a set from Rozwell Kid. I knew nothing about them before going in, but after their set, I must say, I have become a fan. They really brought the energy and really got the crowd going. If anything, it really reignited my love affair with punk music and I have found myself really getting back into it. I owe it all to Rozwell Kid. I highly recommend you to check them out.
Kimya Dawson was up next and it was one of the most wholesome experiences of my life. Her performance was like a mother singing bedtime songs to her children, except it was in a concert hall . Her songs varied from quirky and fun to dealing with heavy, political topics and some extremely raw emotion. It was an experience I will never forget.
AJJ were the final group of the night and the moment most people were waiting for. The crowd was ready for some true blue folk punk. It only took two tracks for the mosh pits to start. The mix of emotional, political folk punk and pure energy from the crowd really created an incredible atmosphere. I sang along to all of my favorite songs, although, technically, all the songs they played were favorites of mine. I will admit, I teared up quite a bit at some points.
All in all, the whole night was an absolute blast, and I very much hope they come back soon.