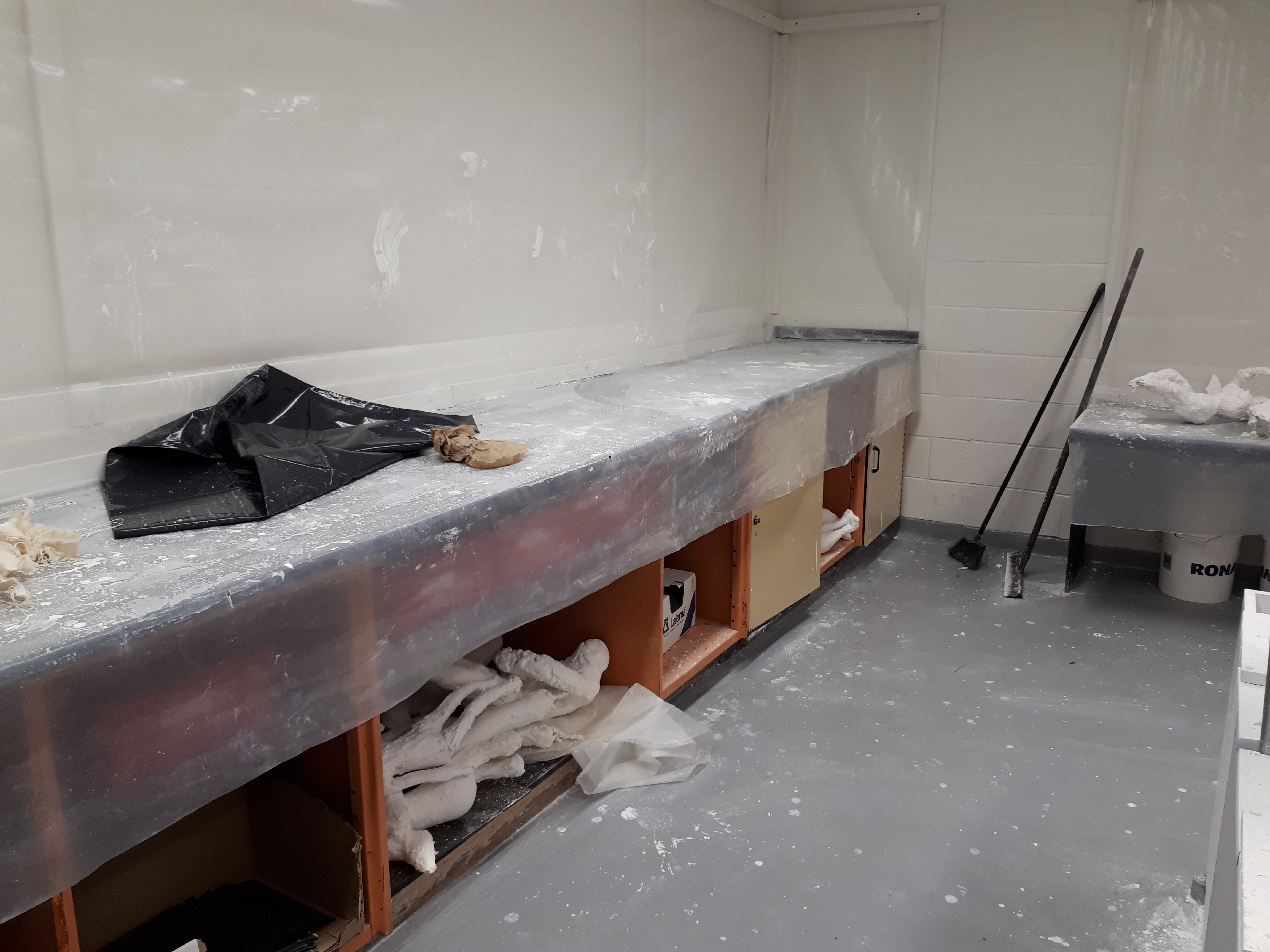 With Jamie Macaulay, Co-Chair of the Visual Arts Department

Q: What rooms and studios are currently under renovation and what are they used for?

A: The facilities in question are temporary printmaking and plaster facilities located on the ground floor of Casgrain. Specifically, we have a new intaglio etching facility, located in what was the old ALC dark room, designed to contain ferric chloride baths and an aquatint spray booth used in connection with intaglio etching. We also have a designated plaster facility, located next door, that will be used for two-piece mold-making.

Intaglio etching is a process whereby metal plates are etched through submersion in acid or chemicals. For years we worked with nitric acid as a mordant, but we’ve wanted to switch to ferric chloride for some time now, as it’s not only a much safer alternative to nitric acid, it’s also the current industry and educational standard. Switching to ferric chloride, however, requires a designated ferric chloride room as the chemical will rust any metal plumbing or equipment located in the same space. The aquatint spray booth, which consists of a small compressor and spray gun connected to a ventilated fume hood, is used to apply a uniform mask to plates before they’re submerged in ferric chloride.

While intaglio etching is just one of various techniques associated with the ministerial competency for etching in Visual Arts, it’s one that we particularly pride ourselves on. Intaglio etching has a long and illustrious history connected with celebrated artists like Rembrandt, Goya, Picasso and Louise Bourgeois, among many others. John Abbott is well known for its printmaking curriculum, which has helped to prepare generations of students for university studies or for work in a professional printmaking environment.

For its part, two-piece mold-making is a specific ministerial-required competency that was introduced at the same time as our new Visual Arts program was implemented several years ago. Two-piece molds are conventionally made in the Visual Arts using plaster, however, we haven’t had a designated plaster studio in Visual Arts for well over ten years now. In recent years, we’ve tried to accommodate the moldmaking requirement in our existing wood and metal studios, but plaster is very messy and can’t be used safely in the same space without contaminating other materials and equipment.

The new temporary facility is a welcome solution to a longstanding structural deficit, but it’s also far from ideal. The space is a bit small for a full class, it has no windows or natural light, and it’s inconveniently located on the ground floor of Casgrain while our other sculpture studios are in the basement.

Q: When were the renovations supposed to be finished?

A: The renovations were supposed to be ready for the start of Winter 2017 in time for Print Media 2 and Sculpture 2, where the intaglio etching competency and the two-piece mold-making competency are covered in the Visual Arts Program. Unfortunately, the facilities were not ready at all during Winter 2017, and despite assurances that they would be finished before the end of the summer, they were still not ready by the time classes started in August. New completion dates were set for October and more delays ensued, and the facilities were still not ready for use by the end of Fall 2017. Regrettably, despite being able to do some preliminary work in the facilities, there are still problems with the ventilation and exhaust system that prevent us from knowing with certainty whether the spaces are safe to use at this time or not. Unfortunately, it looks like we may be right back where we were at this time last year.

Q: What are the teachers’ feelings about these delays to and do they feel that the renovations were necessary in the first place?

A: I think I can safely say that Visual Arts teachers are uniformly in support of the new facilities. The plaster facility addresses a longstanding structural deficit that allows us to finally and properly deliver a required competency in Visual Arts, and the printmaking facility allows us to take significant steps in the direction of improving health and safety for all users of our studios, including students, teachers, technicians and other college staff.

At the same time, Visual Arts teachers are also acutely aware of the provisional or temporary status of the new facilities. Along the way, constant delays have also meant constant headaches for teachers and technicians, not to mention students. For at least three semesters, teachers in print media and sculpture have anticipated being able to work in the new facilities only to have to rethink major projects and assignments once the semester is underway. As you can imagine, it’s an immense burden to have to chart a completely new course once the semester is already underway.

Q: Have the delays to the renovations actually prevented any students from obtaining their degrees?

A: Thankfully, no, the delays haven’t prevented anyone from obtaining their DEC in Visual Arts. While we regret that our second year students didn’t receive technical training in intaglio etching per se, the ministerial competency for etching in Visual Arts is open enough that we were able to satisfy the requirements through other etching techniques. Unfortunately, we don’t have the same wiggle room with respect to the twopiece mold-making competency, as it’s a required ministerial component. Originally, it was proposed that we would cover the competency in the third semester instead of the second, but continuing delays kept this from happening. In the end, second year students were required to complete a six-hour workshop held over two days after classes ended in December or during two evenings in early January.

Q: Do you think the college’s treatment of the Visual Arts program has been equivalent to other programs?

A: Visual Arts is a relatively small program in terms of numbers, but we occupy a large footprint in the college. There’s always a lingering sense that our general culture today perhaps doesn’t value the arts as they could or should, but I don’t think there’s anything sinister happening at John Abbott. I don’t think the college is willfully ignoring or undermining Visual Arts in any way whatsoever. I think this is simply an unfortunate consequence of the college being overwhelmed with a variety of different building and renovation projects at once.

Nevertheless, the continuing delays to the facilities have and continue to create a great deal of stress for those working in Visual Arts. A clear message of support from the college recognizing the burden of anxiety, stress, and overwork the delays have caused for students, teachers, and staff in Visual Arts would go a long way, I think.