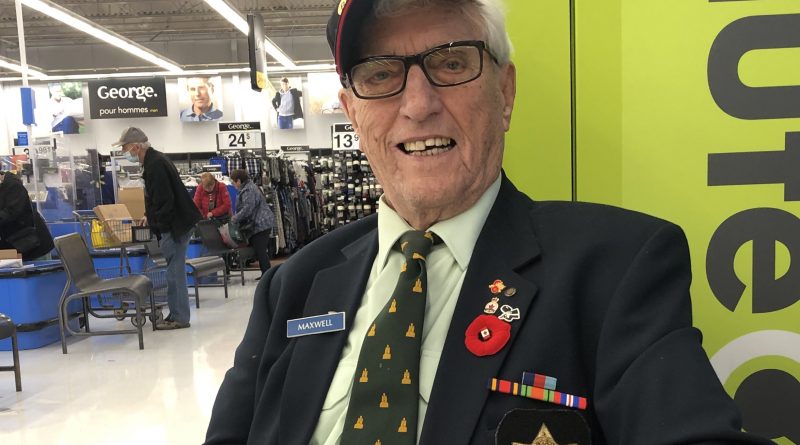 “That’s the result of bombs, bullets, and bagpipes” is what 97-year-old Joseph Maxwell jokingly said as he put on a hearing aid before an interview with me.

Selling poppies at a Walmart in Kirkland to raise money for the Royal Canadian Legion, Maxwell is a World War II veteran having served in Burma.

He was born and raised in a working-class neighborhood in Glasgow in 1925, and lived briefly in Montreal before returning to Scotland.

Maxwell recalls, “our house was just a room and kitchen with an outside toilet shared by three families.”
“Four of us slept in one bed, and my mother and father were in a hole-in-the-wall bed. My youngest brother slept in the bottom drawer.”

He remembers, “that was a real tough time, you know.”

It was September of 1939 when Britain and France declared war on Germany, just a day before Maxwell’s 14th birthday. As a result, schools were closed down and used as barracks.

Maxwell wanted to be an electrical engineer and had excellent marks.

With education no longer being an option at the time, he worked at a butcher shop making 10 shillings (worth ~ £20 today) a week. He got another job delivering milk for the local general store making four shillings a week (~ £8 today).

Fast forward a few years later, and Maxwell found himself conscripted to the Navy once he turned 18 in 1943. His preference was to serve as a Despatch Rider in the Signals Corps of the Royal Navy, but he couldn’t get to the 28-word-a-minute threshold to get that position as he could only achieve 16-17 words a minute.

He remained in the Navy and was serving in Liverpool when the battle of Imphal and Kohima started. The Cameron Highlanders – a regiment of the British Army – lost around 90 men and needed to fill in the spaces.

With the success of D-Day, the Navy didn’t need as many people, therefore Maxwell was transferred to the 1st Battalion of the Cameron Highlanders and sent to the India-Burma region. He sailed on the Empire Pride which took weeks to get to Bombay (present-day Mumbai) before reaching Burma.

Maxwell noted how hot it was upon arrival: “we had these heavy Scottish uniforms, and it was 104 degrees in India!”

While in Burma, food was scarce as Maxwell explained “we would typically have to trade a pen or a watch for food but would sometimes haggle with them and take a banana or something… we had to live somehow.”

As a part of the Cameron Highlanders, the 1st Battalion performed a counter-movement behind the Japanese who were retreating down through Burma.

Shortly after, the Americans dropped the atomic bombs and the Japanese threw in the towel.
Once the Second World War finished, he continued to serve in Burma before being transferred to Allied-Occupied Japan for a year, finishing his military service in 1948.

Maxwell mentioned that one of the biggest challenges fighting in Burma were the monsoons.
“During the monsoon season, it would rain for 3-4 months and churn up the ground. Your boots would be rotten and clothes soaked.”

When describing his life, he says “life’s been exciting, I’m not doing bad for 97!”