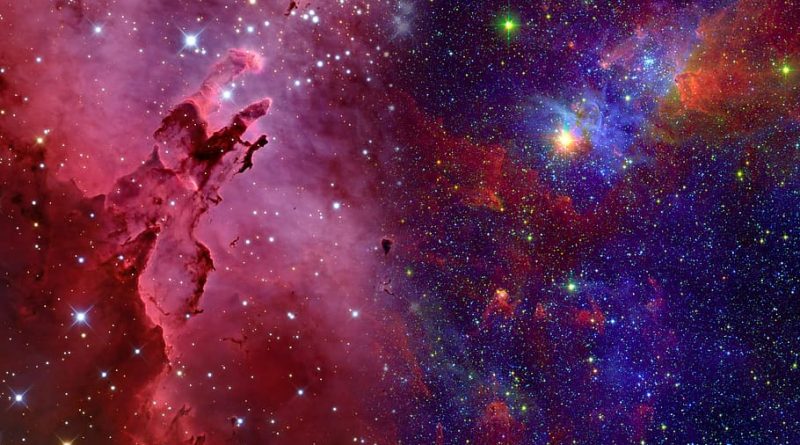 In the beginning, there was Jean-Jacques, a certainly lonely bear. To entertain Himself, He decided to harness the meme energy of the Universe and concentrate it into a single being.

This strange creature was named Lucas, given the title of Meme God, and told his creation was for the meme, and by the meme. His powers of chaos surpassed all, except for Jean-Jacques Himself. Lucas chose to inhabit the 2002nd dimension, but now frequently visits mortals to proliferate anarchy.

After Jean-Jacques’ creation of the Meme God, some energy was left floating in the Universe. It slowly morphed into matter, and from it was born another being called Sebastien. It’s possible that Sebastien is actually a persona of Sebastian, God of Words, but historical accounts differ greatly.

The pandemonium spread by Lucas instilled fear in every soul of our Universe. So to comfort said Universe, Jean-Jacques created another being, gargantuan and fierce. From the 2002nd dimension arose Qian, the ancient eldritch being, with a need to hug the Universe and comfort it in its sorrow. With her giant arms she swaddled the Universe, forever protecting it.

Filled with chaotic energy, Lucas decided to create a being in his own image to spread the mayhem further. So, while Jean-Jacques slept, Lucas stole some Holy Stuffing from His Bear Body. He then imbued the Holy Stuffing with meme energy and molded it into human form. Thus, from the meme was born Andrew, God of Clout.

This theft was not to go unnoticed by Jean-Jacques. As Lucas reveled in his creation, the skies darkened and a great tremor shook the Universe. Jean-Jacques’ anger and desire for balance in the Universe spawned Maxine, Goddess of Order, designed to battle Lucas’ chaos.

Maxine alone was not enough to combat the forces of disorder, as Lucas had his creation (Andrew) to help spread his influence. In an effort to combat this imbalance, Maxine then pulled from the stars and formed Virginia. Dubbed the Goddess of Science, Virginia continues to uphold order with Maxine, and bless those who gaze upon the stars.

This constant battle between the entities of order and discord forced Maxine to become even more fit than she already was from her workouts. She used this extreme strength to combat Lucas to the best of her ability, but even she could not contain such excess muscle. From her toned biceps sprang Casey, Goddess of Sports and Health, who suffered seven concussions upon landing on the ground, but immediately began tackling the forces of chaos. With the wisdom of her seven concussions she lays waste to disorder and gives health advice to all who listen to this day.

One day, Lucas God of Memes, Qian Goddess of Comfort, Andrew God of Clout, Maxine Goddess of Order, Casey Goddess of Sports and Health, and Virginia Goddess of Science were having a family gathering at the Khlubrüm. All were enjoying wine and cheese when a knock came at the door. When Maxine opened, Anthony, God of Gamers (also known as Uncle Tony), came in. All the gods watched in surprise as he comfortably took a seat among them, and they all felt as if they had known him their entire existence. No one ever questioned his arrival and he has lived among them ever since.

One day Virginia was putting together the basis of the binary language, and in her extreme concentration she caused the local intellectual ether concentration to spike. This tore a portal in the fabric of space-time leading to some unknown other level of reality, and through it walked Marc. He was the God of Technology, and his entire being was made of binary and hexadecimal code. The other gods could never truly tell if he was wholly artificial or organic, as he seemed to ride the line between the two.

After having listened to To Pimp A Butterfly and becoming overcome with White Guilt, Andrew travelled to the land of red pandas and adopted Taylor (Marco in pandaspeak). She was dubbed Goddess of Red Pandas and brought one as her trusted companion.

As they were walking home from the land of red pandas, Andrew stopped by to pick up some vinyl discs. Once he had picked up the pile and they began walking again, he tripped, and all the vinyl discs fell into the nearby river. Out of the splash emerged Ryan, God of Cinema, Keeper of Films.

One day, Marco and her companion began to miss their red panda friends, so they left the Khlubrüm to visit their home. They spent three days and three nights together, and so much wholesomeness was created that Marco could not contain it. Out of such energy Marco created Kyle, son of Grace, who was born Wholesome. Lucas, as a joke, placed a curse on him so that once the sun had set, Kyle became a chaos-infused gremlin.

As Marc began to develop technology and disseminate it among the mortals, he grew angry. One of his greatest creations, the internet, came under assault by Lucas’ memes, causing chaos to run rampant. Out of frustration due to their inability to tame this disorder, Marc shattered the internet, causing pandemonium among the mortals. After calming down, Marc created Félix, Lord of Firewalls to uphold order on the network he had created.

One day, Virginia went for a walk in the Universe. After walking, she became famished, and stopped by a passing asteroid to have dinner. She took out her ramen and began to eat. However, she spotted an interesting rock formation and jumped up in excitement, and thus spilt her ramen all over the rock formation. The bundle began to bubble, and from the foam emerged a humanoid being. Upon closer inspection, she found that this being had two faces on its head. The Goddess of Science named both entities Dani, Goddess of Food, and Dani, Goddess of Nature and Rocks.

One day, while doodling comics about the pantheon, Kyle left a box of crayons in the sun by accident and they melted down into a rainbow puddle of wax. It stayed there overnight and when he returned the next morning, the sun and the moon had molded the wax into a human shape which he called Logan, God of Art.

During one of Kyle and Dani’s dates at her Domain of Food, Dani created an especially potent cup of coffee with vast amounts of sugar and brewed with the heat of the Khlubrüm’s core. This cup was designed to keep her awake throughout the day, and topped with latte art depicting the story of the pantheon. During their date, Kyle recited a long piece of poetry he had written the day before, but his writing skills proved lacking. With every wrong use of semicolon and every unnecessarily long sentence, Dani’s cup of coffee bubbled with increasing disdain. Finally, when he started a sentence with And, Sebastian, the God of Words, leapt from Dani’s cup of coffee and destroyed the poem with his sword-like pen. To this day, Sebastian watches over every piece of literature, having minor fits over minor mistakes.

Once Félix began his monumental task of securing the internet, he realized just how difficult it would be to do on his own. He then created Maxim, Vanessa, and Sean to help him in his endeavors. Maxim was the first of his assistants who one day dropped her glasses. They broke in twain and each lens became a ghostly entity. Maxim called them Megan and Laura, and they both became the ghosts of the Khlubrüm.

As Marc was creating all forms of technology, he designed the Mother Camera as the first photographic device to ever exist. So great was the craftsmanship of this Camera that it became sentient and took on the name of Susan, the Mother Camera. Susan then created alternate versions of herself, Sylvia, Andrea, Maya, and Song-Ly, to capture more points of view.

One day, Dani was looking upon the Khlubrüm, and thought it needed more greenery. Therefore, she planted a tree seedling, and with her magic it grew into a mature tree. All rejoiced in this new life, especially Qian Goddess of Comfort, who climbed up and decided to make it her home away from the 2002nd dimension. Soon, the tree became home to other life: bees arrived and built a beehive. Susan also surrounded the tree with flowers, including a Venus Flytrap. The bees produced so much honey that it began dripping out of the beehive. One of the honey drops fell into the Venus Flytrap’s mouth, and the plant transformed into a being. Susan called them Z, and they became the God of Life and Death.