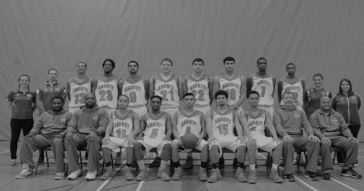 The playoffs were being held at College Montmorency in Laval, where the team would eventually see their hopes of winning a provincial title come to an end after a loss to third place Vanier.

On Saturday night, the men lost to Vanier College by a score of 71-63 in what proved to be a disappointing, yet hard fought game.

In the first quarter, the men started off slow and were only able to muster up 10 points. The second quarter proved to be a much different story as the team picked up the pace and scored 28 points in the quarter which allowed them to come out of the half with a 38-34 lead.

The second half however, proved to be the breaking point for the Islanders as they were outscored 37-25 in the last two quarters, ultimately leading to their defeat.

On bronze medal Sunday, the Islanders played the Dawson Blues in a game that saw the Islanders grab third place with a 76-57 victory.

Unlike their match against Vanier on Saturday, the Islanders dominated in both halves of the game. The men even capped off the first half with a 38-22 lead which never seemed to be contested.

In this game, Jordan Thornhill posted a season high of ten points, while Robert Drury finished with 11 points and ten rebounds.

After scoring ten points and six rebounds, Keevon Small was named player of the game and Justin OwenRenwick was named to the Championship All-Star team after leading the Isles with 15 points and five assists.

On the Friday night before their semi-final and bronze medal games, some Islanders were given awards at the league banquet.

Danielj Cayer and Keevon Small were named to the league’s Second All-Star team, and Justin OwenRenwick was named to the First All-Star team. The awards were capped off with Robert Drury being named the team’s top academic student athlete. All of this capped off a successful season for the Islanders that saw ups and downs throughout the whole season.