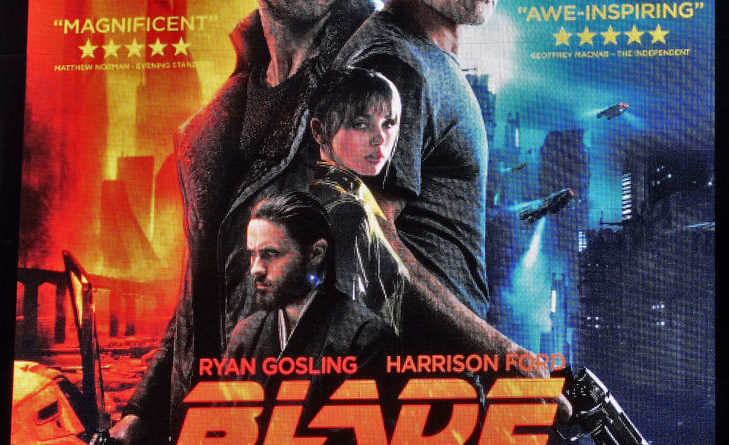 After years of waiting, the sequel to Ridley Scott’s masterpiece “Blade Runner” is here. The thoughts of those words ever being spoken have both intrigued yet terrified fans of the original film. For years, rumors speculated about a sequel, yet nothing ever came out of it until it was officially announced that a sequel was in production. Entitled “Blade Runner 2049”, Harrison Ford returned to play the iconic role of “Rick Deckard”. It was announced that Ridley Scott was executive producing (which I was thankful for because I feel he has lost his touch as a director over the years). What surprised and astounded me the most about the whole announcement was their choice of director, Quebec’s golden boy himself; Denis Villeneuve. I got extremely excited when I heard this news, as Villeneuve is one of my all-time favorite directors, and in my opinion, one of the modern “greats” in the filmmaking industry. The movie had absolutely everything going for me when Ryan Gosling would play a leading role in the film shot by cinematographer Roger Deakins, both of which are some of my all-time favorites. The first teaser dropped and there was no way I was going to dislike this movie. I just knew it.

Now that the film is out, was my excitement justified?

Summarizing the film would put me into spoiler territory; however, in my humble opinion, “Blade Runner 2049” may just very well surpass the original, and is hands down one of the greatest sequels ever made. Not only does it expand on the already vast and rich world that the first one so beautifully created, it adds to it, and even improves upon it. From the first frame, all the way to the very final ending shot, I was dumbfounded by just how gorgeous the film was. Roger Deakins proves himself once again why he is a force to be reckoned with, and he most definitely deserves an Oscar for his work on this film. I’m shocked that he has not won one yet, despite being nominated 13 times. Denis Villeneuve once again shows us why he is one of the all-time greats with the way he directs the film, and despite this film being a Hollywood production, he really shows that he is the one in charge. Though the film is nearly 3 hours long, which can be extremely taxing to the average viewer, his direction makes everything absolutely riveting from beginning to end. The performances from the cast are all incredible across the
board.

If I were to have any issues with the film, they are very minor. However I feel some plot points were not going anywhere in the end, which left me feeling a little underwhelmed. Overall, however, I enjoyed the film so much I was able to overlook some of its minor flaws. In the end, “Blade Runner 2049” was well worth the wait, and I could not be happier with the end result. I absolutely cannot wait to see what Denis does next.