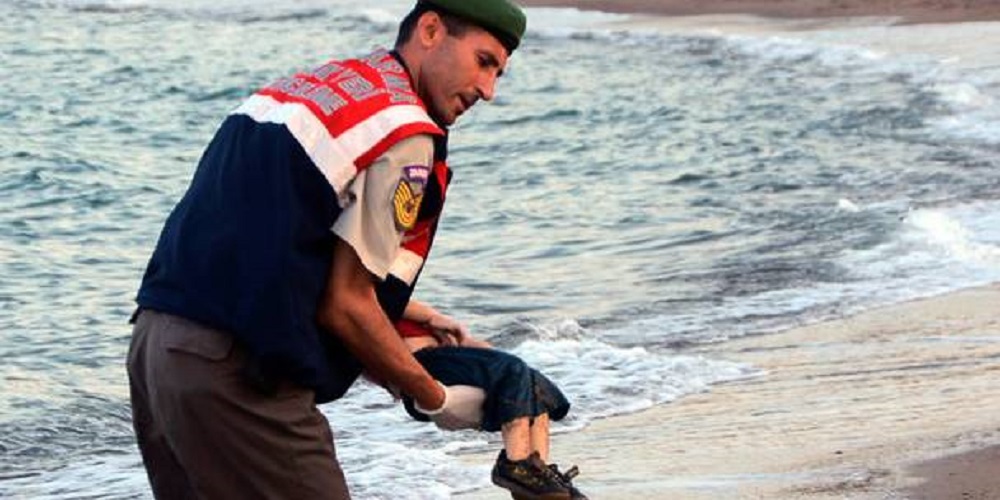 The haunting photo of three year-old Syrian refugee Alan Kurdi who drowned, has put a face to the worst humanitarian crisis since the Second World War. Abdullah Kurdi, a husband and father of two boys was on his way to find a better life for his family. He ended up being the member of the family to survive the journey. It was on September 2nd; while on the dangerous route from Syria to the Island of Kos in Greece that two packed boats overturned due to capacity being over the weight limit. Young Alan was one of thirteen other evacuees drowned that day, just off the Turkish coast.

The grieving father had compensated smugglers 4,000 euros. (CBC) The money was sent by his sister from Canada for the risky trip that thousands attempt to make daily in an effort to escape Bashar El-Assad’s dictatorship and ISIS’s activities. Abdullah Kurdi had tried immigrating to Canada, his sister’s current country. However, Citizenship and Immigration in Canada refused, having only received a refugee application from his brother Mohammed. This application was rejected for not meeting managerial qualifications to have a refugee status recognized (CBC).
Two days after the tragedy, the three deceased members of the Kurdi’s family were flown to Turkey and Syria’s outskirts. From there, funeral vehicles drove to the border town of Suruc; where supporters of Kurdi waited. They walked to his hometown Kobani with the corpses, the place he was originally attempting to escape from with his loved-ones in tow.

Kurdi has decided to stay in his hometown, to be closer to his late family. He mourns, brings them flowers, prays, and talks to their graves as if they were still alive.

Syria still remains in rebel and jihadist militant hands. In Kobani, at least 233 civilians were shot and almost 300 others were injured just this past June. An estimated 3 million civilians have fled to Syria’s immediate neighbours: Turkey, Jordan, Iraq and Lebanon. Somewhere between 2 and 4 million Syrians have left their country to stream into different parts of Europe (BBC). Germany has promised to attempt to take in 85% of Syrian refugees who apply for asylum, the highest number among any global powers to date (CNN). Across the globe, countries are accepting refugees, though none so extensively as Germany. Canada is accepting 13,000 refugees; Sweden is taking in 4,500 and Norway 8,000. (Daily Mail) Countries such as Finland, France, the UK, and Austria are also trying to help desperate refugees from the war torn country.