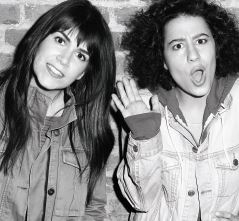 Broad City is like no show you’ve ever seen before, which is why it’s become an overnight success. The stars of the hilarious Comedy Central series are the charming, newly popular female duo Abbi Jacobson and Ilana Glazer.

The series follows Abbi and Ilana as they experience the glories of young adult life together in New York City. Abbi, who works as a janitor at a gym, is trying to become a successful illustrator, while Ilana attempts to avoid work at all costs and tends to be the main creator of the duo’s hijinks. The two find themselves falling into an array of misadventures.

Fun fact: Before Broad City was the hit TV show that it is, it was a miniseries on YouTube! Each video was a mere 3-5 minutes, while still bringing in around 200,000 views every time. Luckily for Abbi and Ilana, Amy Poehler, one of the most hilarious and loveable female comedians on the planet, discovered them through their YouTube videos, and of course the rest is history. Amy became a mentor to Abbi and Ilana and was signed on as an executive producer of the show. Amy even guest-starred in the finale of the first season! Fast forward to today and Broad City is dominating the mainly male Comedy Central roster. They’ve finished their second season and have been guaranteed a third for 2016. Critics like The Wall Street Journal have referred to this show as a “feminist sneak attack”, which is very true in a sense. Abbi and Ilana use their own experiences to paint an entertaining yet real picture of what it’s like to be a young woman growing up in New York City. No fabrication or Hollywood-esque styling is needed. Broad City is slowly but surely taking the world by storm, and by their third season, I believe Abbi and Ilana will have already become household names in the entertainment industry.