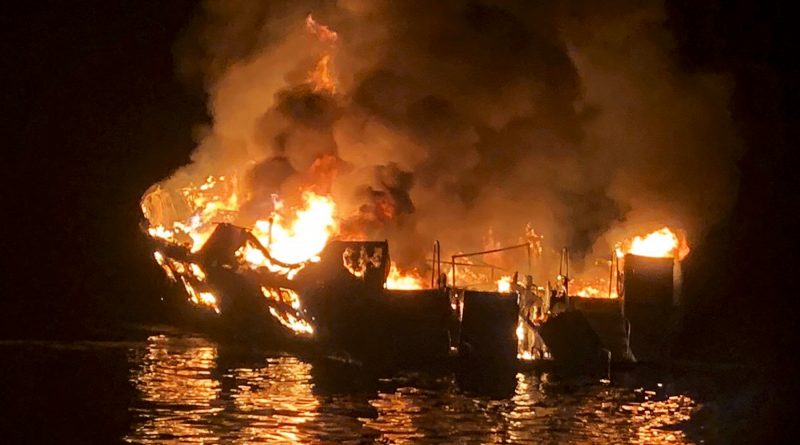 A boat off the coast of Southern California caught fire last week on September 2nd. The ship held 39 people with 34 people having been confirmed dead due to highly toxic smoke inhalation. The fire began around 3:15 a.m. on the 2nd and was sunken by 7 a.m.

Investigators are working in collaboration with the California Coast Guard to identify the victims and have halted the salvage of The Conception due to weather constraints. In regards to the suspended salvage, Coast Guard Petty Officer Mark Barney commented: “We are just waiting for Mother Nature to cooperate.”

The victims, who were sleeping in the lower deck of the ship, likely became trapped as the fire engulfed the emergency and escape routes. Surviving crew members told investigators that they attempted to rescue the people trapped. They then had to jump from the boat and some swam to a skiff on the back of the boat.

They attempted to re-enter the boat from the back side to save the rest of the crew, but could not access any of the fire equipment because it was all engulfed in the flames. As of Friday, September 6th, the Santa Barbara County Sherriff’s Office says that 33 bodies have been recovered and one remains missing. Lt. Eric Raney had this to say as of Sunday the 8th “This is all just part of the ongoing investigation,” Raney said. “The Coast Guard was assisted by ATF which is investigating the fire and the FBI which has expertise in criminal investigations.”