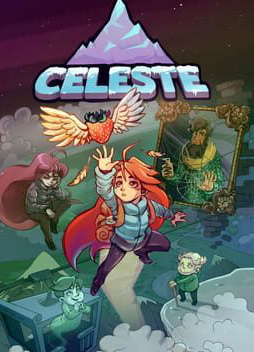 Celeste is a platforming game created by Matt Makes Games which was released on January 25th, 2018. The story follows Madeline, a young woman who struggles with anxiety and depression, as she attempts to climb Mount Celeste in Vancouver Island.

The gameplay is very tight and responsive. Madeline has a dash she can use in the air and on the ground, which feels great to use. The best thing about the dash is that many of the stages use the dash to affect other objects in the levels or vice versa which gives the gameplay sort of a puzzle-platforming vibe.

The mechanics are easy to learn but very hard to master, as the game will throw you across the room with its difficulty. This game is really hard from the start and it feels totally justified when you do fail a challenge. You’re never more than 15-20 seconds from where you die, and you respawn almost immediately after you die so it doesn’t feel as bad when you notice that you’ll literally be dying thousands of times.

One of the best aspects of the difficulty is how it weaves its way into the story. Madeline started climbing Mount Celeste because she knew it would be difficult. She wanted to overcome her depression and anxiety by finally fulfilling that promise to herself which is not an easy thing to do. In order not to spoil too much, Madeline is one of the most believable and relatable gaming characters ever.

There’s not much else to say, it’s impossible to do it justice just by explaining the game to you. Go play Celeste, it’s at a decent price and it’s just amazing.