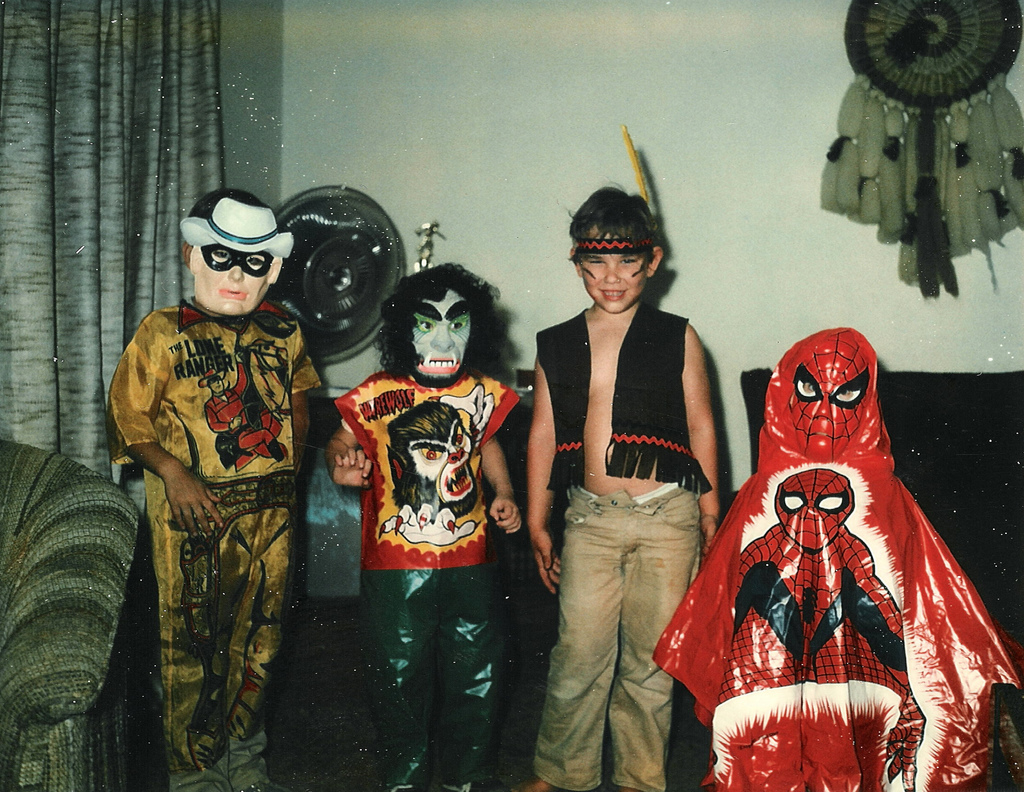 Is Your Costume Racist?

Every year, on October 31st, we, in our attempts to be scary, funny, or sexy wear costumes depicting animals, mythical creatures, superheroes, etc. However, from time to time, one of us dresses up as a person from a different culture or religion than themselves. Perhaps the term “dressing up” is a misnomer, considering that these costumes do not depict actual people of varying cultures and religions. These costumes present dated, stereotyped, and simplistic images that exploit their image, often with painful results; and why? For the sake of one’s friends exclaiming “Wow! You’re so funny and ironic! Won’t you sleep with me?” Although this is a noble and admirable reason for belittling other cultures and insulting people to the point where they’re in emotional turmoil, one humble writer believes that maybe, just maybe… that’s a touch racist.

Now, my intent here is not to make you feel awful for the “Pocahontas” costume you wore last year, or the “terrorist” costume you’re planning on wearing this year. In fact, I don’t believe that your poor decisions to wear these costumes were entirely your fault. If the thought that you might be hurting somebody never even entered your head, then how could you have known it was wrong? In your mind, it might have just been a costume: a way to brighten up other people’s day with comedy, or a day to be something you’re not, right? We are each but a product of the society we live in, and so, it’s not your fault you were accidentally racist, because the media messages thrown at you throughout your lifetime have depicted people of color in predominantly stereotyped and simplistic ways.

In reality, however, you are accountable for the pain you cause in others with costumes or any other well­-intentioned racism. And hey, it’s not just minority groups that are harmed by these representations. They harm every single one of us, because they reinforce the idea that entire groups of people can be distilled down to a stereotype and that it’s morally correct to take what you want from others.
At this point in the discussion, I believe that it would behoove us all to explore specific examples of racist costume ideas. There are a few that we all know are wrong, such as “blackface” and a Hitler costume, because these are so obviously offensive that one should never even consider them. But, there are a plethora of costumes that we’ve all either worn or seen, and we didn’t consider the potential emotional damage they could cause. One of these costumes that seems to slip under the racism radar is the Pocahontas costume. The hundreds of years of killing, slavery and cultural genocide are pretty good reasons why a non Indigenous person shouldn’t don a “Native American headdress” on Halloween, or ever. When looked at in this fashion, it’s plain to see that a Pocahontas costume, or any costume involving First Nations’ attire, should be off­ limits.
But how about wearing clothing from a culture that white Canadians haven’t had direct negative historical effects on? Like “Mexican” or “Bolly Ho” or “geisha” or “African” or “Arab” or… the list goes on and on, sadly. So, what’s wrong with that? Well, usually this is done comically, as the
idea of a (usually) white person wearing another culture’s symbols and manner of clothing is funny. What about these other cultures makes them comical? What gives the dominant culture the right to appropriate other culture’s clothing and expression? Oh yes: privilege. But that’s a topic for another article.
Now, let’s discuss an important topic that cannot be overlooked in this context: free speech. Obviously, we all have the right to wear what we like, to say what we feel, and to be who we are. But, this does not mean that through doing so we should be absolved from any and all repercussions. Technically speaking, I, being white, could walk into class tomorrow and say the “N word”, and claim that I can because of free speech. However, no one in their right mind could construe that event as not being racist. It is the exact same situation as me walking into class on Halloween in blackface. Although I am entitled to wear what I like, nobody could say that I’ve worn an ethically­ conscious costume for Halloween this year. Free speech is not “no repercussion” speech; one can say and do what they like, but if what they say or do is bigoted or insensitive, I hope that they see and hear the error of their ways through others’ free speech.
So this year, when you’re looking for a Halloween costume, take into consideration your position of privilege, the history and current reality of oppression, as well as the feelings of others. Make an effort to wear a costume that isn’t offensive to anybody. You can use this as a sort of challenge to be creative this year. For instance, I’ll be dressing up as an “anti­racism police officer”, and I’ll be handing out tickets, so beware.

2 thoughts on “Cultural Appropriation at Halloween”