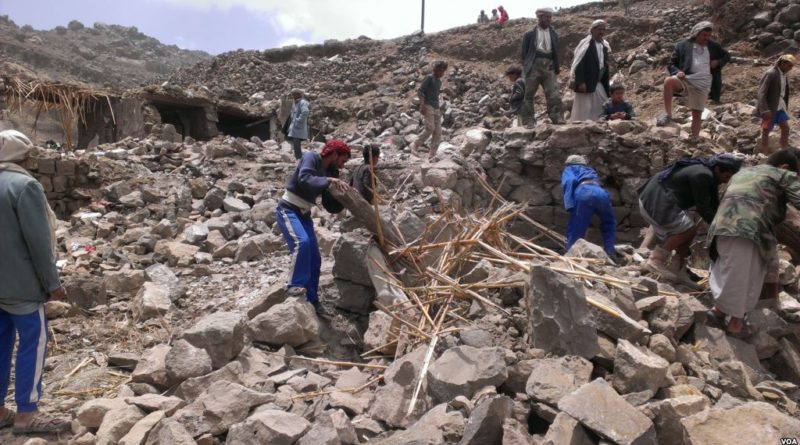 Since 2015, Yemen has been engulfed in a deadly civil war, which mainly opposes Houthi rebels and a coalition backed government forces. The conflict started when the Houthis took control of western Yemen and forced President Hadi out of the country. Many countries in the Middle-East saw the Houthi group as an Iranian proxy to increase the latter’s influence in the region, and so nine states including Saudi Arabia and the United Arab Emirates formed an armed coalition to restore President Hadi’s government to power. The coalition is being provided with intelligence and logistical military support by the US, the UK and France.

According the UN, it is estimated that 9 245 people have been killed, two thirds of which were civilians, and 52 800 others have been wounded. Another 22 million people (75% of the population) have been left relying on humanitarian aid, due to blockades from both sides denying them basic life resources such as food and medicine. On August 9th, 40 children were among the 51 killed in a coalition air strike that hit their school bus in the middle of a busy civilian market. Again, on August 24th, 22 children and four women were killed in an air strike, this time drawing condemnation from the UN, who released a report accusing both sides of possibly committing war crimes. Amnesty International has accused both factions of definitely committing war crimes, namely by targeting medical facilities, schools, mosques and markets.

Although the Saudi-led coalition apologised for the deadly air strikes of the 9th and 24th of August and according to the BBC, “promised to compensate families of victims and would also review its rules of engagement,” it has rejected the UN report on war crimes. Also, despite of the report, the US and the UK (the latter of which has signed and ratified the Arms Trade Treaty forbidding the sale of weapons when and where there is a possibility of war crimes being committed) continue to provide weapons, intelligence and logistical aid to the coalition.

This conflict has reached deadly and horrific proportions. Yes, the fighting factions may have apologised. Yes, they might have promised “compensation”. But what good will apologies and reparations do to families that have lost their children and children who have lost their families? It is unacceptable that such war laws be violated so impudently and with such impunity. States and groups, especially powerful countries such as the US and the UK, cannot be allowed to simply brush off the UN reports and continue as if nothing had occurred. Being a powerful nation does not mean that one is devoid of responsibilities, obligations and accountability. This is especially true of the US, who if as a superpower wants to claim hegemony over the globe should show the world that it can responsibly handle its power. Sadly, that has clearly not and is evidently not always the case, as its continued support of the Saudi-led coalition demonstrates. It is important that the international community not only outright condemn the actions of the Hadi government, the coalition, the Houthi group and the US and UK, but it must also ensure that they are held accountable for the humanitarian crises going on in Yemen. There are many ways to make this clear other than issuing statements, for words are nothing but wind that can be ignored. For one, we the people can have our voices heard by our governments. Public opinion and pressure often pushes governments to act accordingly. Also, it is important for the international community to agree to impose forms of sanctions on these groups to make them clearly understand that such actions will not be tolerated and will not go unpunished as they so often have. As an International Politics student, I understand the difficulties in imposing sanctions on countries like the US, the UK and Saudi Arabia. However, I hold it true that human suffering and loss of life are wrongs that we simply cannot continue to ignore. We have done so enough throughout our history, we continue to do so today, and there comes a time when we must stand firm by our fundamental beliefs despite the difficulties, challenges and risks. Why? Because it’s worth it.

It is good to note that progress is not impossible since some steps to ending the conflict are beginning to be made. The Houthis have recently agreed to a ceasefire at the UN’s request, This follows the temporary opening of the vital port of Hudaydah, thus allowing for essential humanitarian aid to reach the population. These steps clearly show that peace is not impossible if one actually takes the time to listen and talk. As I learnt while writing an assignment, many solutions exist. Of course, no one will ever be entirely satisfied, but compromise is not a terrible thing. For all of Yemeni population’s sake, that all factions and world powers learn that soon.