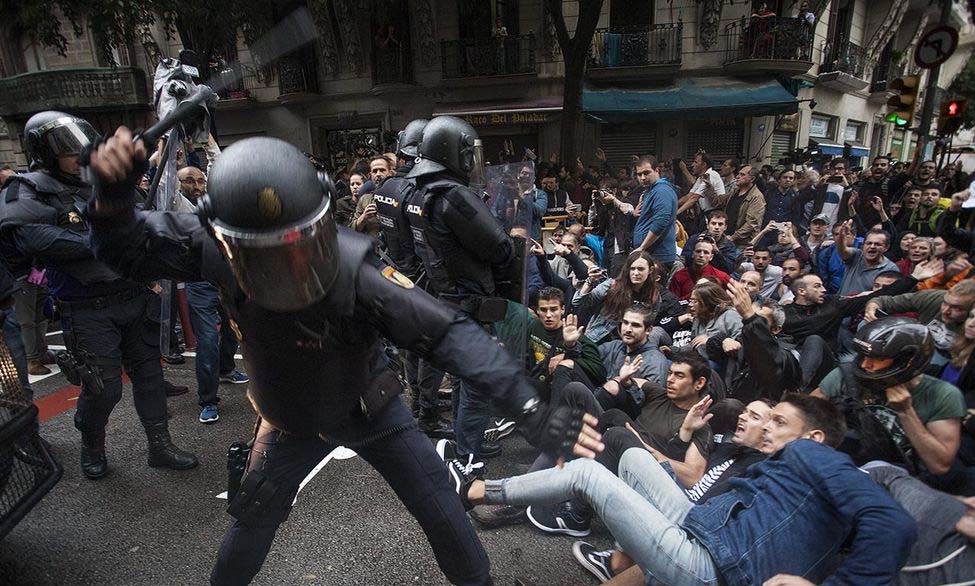 Images like this seem like something alien to us in the West: police bloodying people for voting. And yet that was the reality in the streets of Barcelona on the 1st of October as Spain’s Guardia Civil descended on crowds set on deciding for themselves the future of their nation. This fiasco was not something that happened overnight, but rather is a highly divisive issue amongst Spaniards and Catalans that has centuries of history behind it.

To understand why some Catalonians want independence from the Spanish Crown, one must first know how the Iberian kingdom came to be. After the Christian kingdoms in the north of modern-day Spain reconquered the southern peninsula from the Muslim Moors, an event also known as the reconquista, the many kingdoms of Iberia were absorbed into the kingdom of Castile (which would later become Spain) either through warfare, or more importantly through dynastic union. The multi-ethnic subjects of these rulers had no concept of nationhood, so for the most part they did not object to foreign rule. Fast-forward to the French Revolution and to Napoleon’s invasion of Spain and Portugal at the dawn of the 19th century and the concept of nationalism now exists in the Iberian public consciousness. The largest problem with this was that Spain was a country dominated by the Castilian nation ruling over a multitude of oppressed nations such as the Catalan, Galician and the Basque, all of whom never had a say in whether or not they got their own nation-state.

The next century saw massive unrest for the once great state, with rebellion and revolution becoming almost common. This period would come to a devastating end with the Spanish Civil War in the late 1930’s, which pitted the Republican Catalan, Andalusian, Galician and Basque speaking anarquistas against the castilian monarchists/fascists led by Franco and backed by Nazi Germany and Fascist Italy. Almost 3 years and 600 000 dead later, the Francoist faction won and rescinded protections given to Spain’s minority communities only a few decades earlier and went on a campaign of repression against these cultures, outlawing them and killing dissenters en masse. Even 40
years after his death and the return of democracy, the country is still divided by his legacy, noticeably by the rivalry between the monarchist Real Madrid and the republican FC Barcelona.

Catalonia, an autonomous region (province) of Spain, has had a growing secessionist movement for the last few decades, culminating in the recent referendum. Many factors led to this use of their right to self-determination, such as their unique culture and history, repression from the days of Franco, condescension from the rest of Spain and last but certainly not least the fact that they pay far more in taxes to Madrid than they receive in subsidies. At first glance, the 92% “Sí” vote seems to show the regions desire for statehood, however there was only a 43% participation rate because of ballots stolen by police forces and a prounion boycott of the referendum. These prounion Spaniards and Catalans decided to abstain because the referendum was illegal under both Spanish and Catalan law. They see Catalonia as part of a multicultural yet indivisible Spanish state.

Madrid is opposed to a vote on the independence of any of its regions as, if the Catalans leave, there is then precedent for the Galicians, Basque and others to follow suit, spelling out the end of Spain as it currently exists. They argue that the referendum should not have been held because it goes against the Constitution of Spain (it is important to note that amendments to this constitution are nearly impossible) and that Catalonia is only rich because of the industrial subsidies it received under Franco (a man who outlawed the Catalan language in public life) and thus the region is indebted to Madrid. The current ruling party of Spain, the Partido Popular, founded in 1977 by an important minister under Franco, used excessive force that shocked the world when they tried to stop the independence referendum, sending over 800 to hospital for simply waiting in line to vote.

The EU does not recognize this attempt at statehood, despite Catalonia being intensely pro-Europe. This is likely because the borders of European countries are based not on nationality, but on warfare, meaning that many of them must deal with their own separatist movements which would be emboldened by an independent Catalonia. Recently, French President Emmanuel Macron has said that Catalonian independence would mean expulsion from the EU. This mixed with the economic uncertainty that follows the creation of a new country will spell disaster to a free Catalonia. Unfortunately, the rulers of Europe care more about their own hegemony than they care about the will of a people to be free, and would sacrifice lives and stability to preserve the status quo.