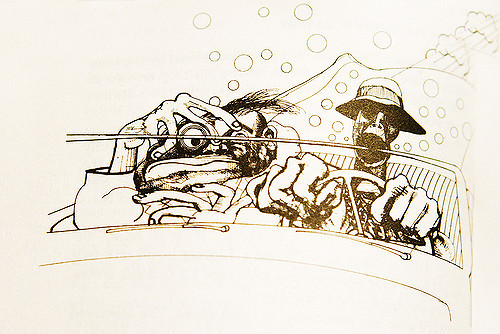 “We were somewhere around Barstow on the edge of the desert when the drugs began to take hold.” This opening line launches the viewer into the adventure of the journalist Raoul Duke (fake alias of Hunter S. Thompson) and his lawyer Dr. Gonzo. While their official purpose on this trip is to cover a motorcycle race in Las Vegas, it quickly degenerates into a drug trip through the city. The two of them stumble their way through the City of Sin while all sorts of psychedelics fuel their paranoid imaginations.

In a technical aspect, Fear and Loathing in Las Vegas is masterfully crafted. From the dutch angles that accentuate the constant paranoia, to the shifting, melting lights and colours that accompany different drugs as our protagonists take them. All techniques are used to make the viewer feel as if they too are on a trip along with Duke and Gonzo.
Throughout all their misadventures, the real heart of the movie shines through Duke’s internal monologues. In all encounters, Duke has a way of analyzing people’s own depravities they refuse to embrace and exposing them to the viewer which entices you to continue watching this madman’s tale. Halfway through the movie, he has a moment of clarity that provides the perfect encapsulation of the 60s era and why it was doomed to fail. This monologue is a favorite of mine, for it is a perfect mix of nostalgia for an era now gone and how Duke accepts his lost of identity now that the movement was dead. I would recommend it for anyone who isn’t too bothered by either gross outs or unsettling subjects.