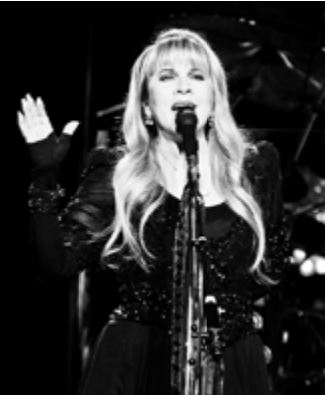 On February 5th, I got to see Fleetwood Mac in concert at the Bell Center. I’ve been a huge fan of the band for years now and I was very excited for the concert, especially since they cancelled back in 2013, which was so disappointing! The show started at 8 PM, and we didn’t have to wait very long for them to finally show up, which was a relief as we’d all been waiting eagerly. All members were present: Stevie, Lindsey, Mick, John, and even Christine, who had only recently returned to the band after sixteen years of absence.

The concert started on a strong and energetic note with “The Chain”. They performed many crowd pleasers like “Dreams”, “Go Your Own Way”, and “Landslide”, as well as many other songs off of Tusk and Tango in the Night. It was amazing to see just how passionate they still are about what they do, even after all these years. I was especially excited to see Stevie, who I admire so much. Alone, she is a radiant force on stage, but alongside Lindsey and Christine, the performance becomes all the more captivating to watch.

Throughout the entirety of the lengthy show, the band was incredibly enthusiastic and charismatic, which made the whole experience even more enjoyable. You could easily tell that they were so appreciative of their fans and eager to be performing. The concert did not disappoint, and I am so glad that I went! It’s definitely a concert that will forever stand out in my mind.