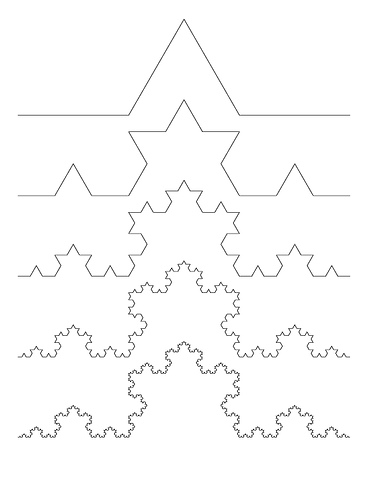 What do trees, waves, mountains, and a Romanesco cabbage have in common? These natural objects are all considered fractals. A fractal is a geometric figure whose structure is independent of scaling. In other words, we can “zoom in” or “zoom out” of the structure, and it would appear the same, or at least for natural objects, very similar. Therefore, fractals consist of infinite patterns which are repeated infinitely.

The main goal of the project is to demonstrate the relation between the Koch curve’s fractal dimension and its perimeter, area, and the overture at each step. What happens to the dimension of the Koch curve when the overture is not equal to one? Can we calculate the curve’s dimension if each triangle is not divided proportionally (i.e. the triangles are not self-similar)? What value of the overture will produce the largest area under the curve? What happens to the curve’s dimension if we randomly choose some steps to form inward pointing triangles, and other to form outward pointing triangles? Can we apply the Koch curve pattern to various applications (e.g. the length of a shoreline)?

The mysteries of randomness and self-similarity are infinite.