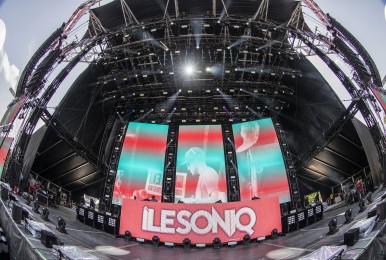 I must admit that when the lineup for Ilesoniq 2017 (August 11 and 12) was announced, I was in no way impressed and not too thrilled about buying a ticket. I attended all previous editions of the “EDM” (electronic dance music) festival, but I only decided to attend this year’s Ilesoniq thanks to this page’s editor. After having attended this summer’s Ilesoniq, I can say that Ilesoniq 2017 was the festival’s best edition that I have ever been to.

One big change from previous years has been the change of location. While still in Parc Jean-Drapeau, the event which was previously held on Ile Saint-Helene took place on Ile Notre-Dame, and even though the walk to get there was a bit longer than before, the venue was better than it was on Ile Saint-Helene. What helped is that a carpet was laid down to cover the whole area in front of a stage in order to avoid having to deal with huge puddles of mud, water, beer and other stuff which attendees had to be careful of previous years. But the best thing about the venue, was where the stages were located or placed.

Now on to the best part of the festival: the artists’ performance and sets. If I have to say one thing about the artists that were present, it is that it contributed into making this year’s Ilesoniq the most diverse in terms of genres of electronic dance music.

While not a big fan of rap, Desiigner’s performance was awesome and full of energy, while O.T. Genasis’ was lackluster as he sang only half the time with recordings of his songs and lyrics filling up the other half. Afrojack and Tiesto who were headlining the festival one the Friday both played some really good songs, although, I would have liked for Tiesto to tone it down in terms of remixing his classics and keep some of them as is. With that said, Tiesto still surprised me with a lot of fresh songs and more particularly with a few songs such as one track from Danger that, in a good way, it gave a dark vibe to his set.

Saturday was memorable for me as I discovered some great artists and the Neon stage. In front of Neon stage, there was just one big dance floor. As I arrived there Kremin was performing and playing a ‘brutal’ set, and everyone was dancing which was one of the best thing about that place that evening. Artists that followed, Ghastly, Malaa and Excision kept the crowd dancing, making the crowd one of the most engaged and fun crowds that I have ever been in. Malaa’s set had smoother and ‘chill’ vibes, which was great and welcomed, because Excision then followed with the most insane set to which I decided to ‘headbang’ while others had to throw themselves into some crazy ‘moshpits’.

In all, the festival was a huge success and from the looks of it had a lot more attendees than previous years. Most artists playing there were awesome and contributed to making that weekend one of the best weekend ever. As for the venue, I hope that the event’s organizer will decide to remain at that same spot next year. With this summer’s Ilesoniq, I am really looking forward to next year’s festival and highly recommend people to attend it.