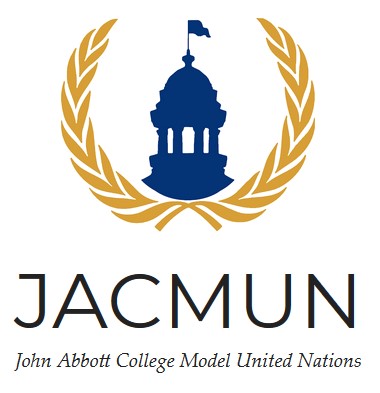 This past weekend, April 7th and 8th, the college hosted its 2018 rendition of the John Abbott College Model United Nations (JACMUN) conference. For those unfamiliar with the concept of Model United Nations (MUN), participants are assigned countries or characters who they must represent in a committee setting. Participants have time to research a set of topics at home before coming to the conference to debate and draft resolutions to respond to the topics that they deem most important. A mix of public speaking, diplomacy, writing skills, and endurance, MUN is really a multi-skilled activity, and one that provides a fantastic opportunity for personal development.

At JACMUN 2018, the featured committees were the United Nations General Assembly: Peacebuilding Commission, the Uber Board of Advisors, the Canadian Armed Forces Council, Marvel Civil War, Cleopatra’s Egypt, and a special Ad Hoc committee in which participants were dropped into a world where towns were getting surrounded by huge domes. Hosting over 180 delegates, from colleges and high schools alike, this was one of the largest JACMUNs yet.

All of this would not have been possible without the dedication of the JACMUN club members, alumni and secretariat members, who staffed the conference and have been working since the fall semester to organize it, as well as the efforts of volunteer students and the student activities department.

Dalton Liggett, Secretary General of JACMUN had this to say: “I am amazed at the quality of debate, rhetoric, and diplomacy we saw take place from our delegates this weekend. I am beyond proud of my entire staff and secretariat team for not only making the largest ever rendition of our conference, but also for composing themselves with an exceptional degree of professionalism and finesse. On the behalf of my entire team, thank you to everyone who attended!”

JACMUN returns next year for its 2019 edition, which hopes to be an even greater success!