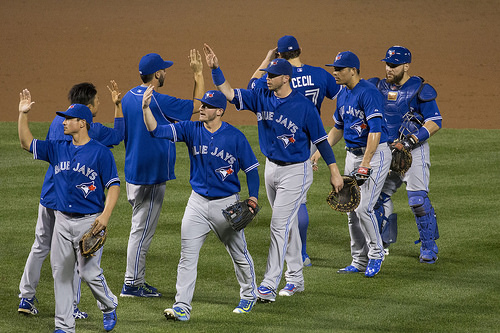 On October 23rd, 1993, the Toronto Blue Jays defeated the Philidelphia Phillies 8-6 to win the World Series. This year, the Jays’ return to the postseason got off to a rough start as they lost games 1 and 2 to the Texas Rangers (5-3 and 6-4). The 5-game series moved to Texas with the Jays desperately needing a win.

Game 3 was no contest, with the Jays winning 5-1. Troy Tulowisitski got his first playoff hit as a Jay, with the three-run home run that gave them the 5-0 lead. The Jays also took an early lead in game 4 and never looked back. With three home runs in the first two innings, the Jays glided into the 8-4 victory.

The series-deciding game 5 returned to Toronto and it was the Toronto Blue Jays who won it. After going down 2-0 early in the game, the Blue Jays rallied back. The Rangers made three unforced errors in the 7th inning, and it was Jose Bautista who made the difference. With Donaldson and Goins on 1st and 3rd, Bautista sent the ball out of the park for the three-run home run. It was 20-year-old relief pitcher Roberto Osuna who sent the Rangers home with three quick outs in the top of the 9th. The Jays will go on to play the Kansas City Royals in the 7-game American League Championship Series to fight for their chance to play in the World Series.