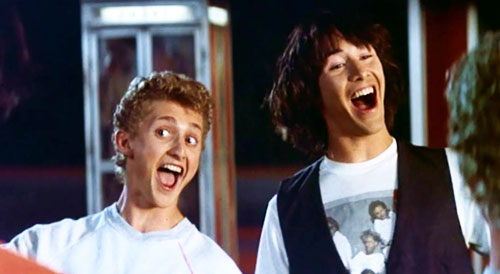 With the announcement of Bill & Ted 3 coming next year, it’s necessary to watch the original 1989 film that started the franchise.

Bill & Ted’s Excellent Adventure, starring Alex Winter and Keanu Reeves, centers around two high schoolers who aspire to be rock stars. Ted’s father threatens to end that dream if he drops out of school, so the duo races to finish their history report to keep the band alive. Fortunately for them, they are assisted by Rufus: a man from the future who provides them with a time machine. Logically, they decide to abduct numerous historical figures, from Napoleon to Socrates, to help them prepare a most bodacious report.

As a buddy comedy, most of the film’s appeal lies on the chemistry between Winter and Reeves. The two of them play off of each other perfectly as history unravels before them. Time traveling isn’t taken too seriously in this film as paradoxes are ignored in favour of plot conveniences. The script, consisting mainly of a thesaurus page on the word ‘awesome’, is instantly quotable and attention-grabbing from start to finish.

Bill & Ted’s Excellent Adventure is a stoner film done right. If you’re not a fan of modern Seth Rogen style stoner comedies, let this film be an example of what those films can be. Frankly, I’d recommend it to anyone in the mood for some silly comedy with two awesome dudes.