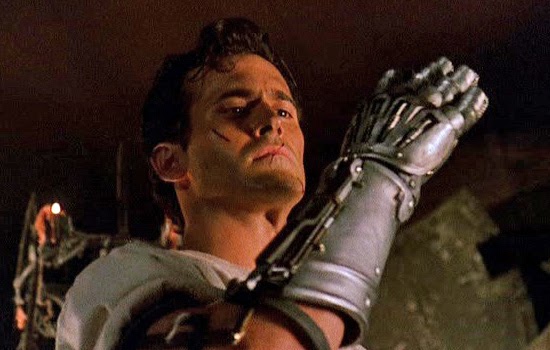 Army of Darkness is the final film of the original Evil Dead trilogy by Sam Raimi, following the previous films’ protagonist, Ash, as he is transported back to 1300 AD by the Necronomicon. Once there, he must find the nearest Necronomicon, speak the right incantation, and return home. Unfortunately, he mispronounces the words and summons an undead army.

While the first two Evil Dead movies were a balance of horror and comedy, Army of Darkness cranks up the comedy to eleven and almost gives up on the horror. A lot of the comedy comes from Ash, played by Bruce Campbell, being a smart*ss while surrounded by serious knights. If you’re familiar with Sam Raimi, you’d know that physical gags are unavoidable, with Ash getting hurt by miniature demon doppelgangers, for example. The special effects are hilariously bad; the army of the dead suddenly transform from stop motion skeletons in one shot to stuntmen with skull masks in the next.
As the film starts off with a brief recap of the previous entries, it is not necessary to watch the first two Evil Dead films before Army of Darkness. I absolutely recommend this film. It is a complete schlock fest from the acting, the comedy, the writing, and the special effects. Army of Darkness will have you spend as much time laughing at it as laughing with it.