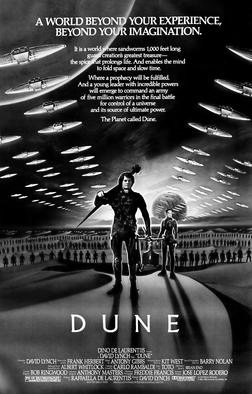 Since our Montréal star director Denis Villeneuve is attempting a new adaptation of Frank Herbert’s timeless classic Dune, I went back and checked out the first attempt by David Lynch in 1984.

A 137 minute-long recreation of the epic series’ first book, the 1984 film attempts to recreate the fantastic religious depths, the mesmerizing political intrigue, and the enormous scale of a story centering around a prophesied hero. Unfortunately, by attempting to capture the whole scale of the story in such a short time, the film’s story comes off as rushed; character development that took hundreds of pages is given a scene or two and the whole film’s second and third acts are less than half the runtime, giving a feeling of a sudden resolution that isn’t earned.

Despite that, the film’s production design is magnificent and reflects the passion put into the adaptation. Be it the feuding Houses of Atreides and Harkonnen, the Emperor and his subjects, the Spacing Guild, or the wild Fremen, every group’s culture and personality is thankfully portrayed through their costumes and the film’s sets since the script allows for very minimal characterization.

Unfortunately, most of the acting is over-stylized and falls completely flat due to the curt script dialogue and the overuse of internal thoughts that doesn’t work as well as in the novel.

Honestly, 1984’s Dune isn’t a particularly good movie unless you’re already a huge fan of the written series. I’d much rather recommend the book itself and hope for another masterpiece from Villeneuve’s Dune next year.