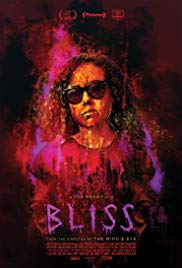 Released last year, Bliss is the third movie from up-and-coming horror director Joe Begos. Centered around Dezzy, a young painter going through a creative block as her money is running dry, the film follows her hallucinatory drug trips that become increasingly violent, but helpful for Dezzy to finish her masterpiece. As the drugs fed to her by her friend Courtney start giving her a craving for blood, Dezzy’s descent into madness makes for a cathartic watch that is utterly enthralling.

Reminiscent of Fear and Loathing in Las Vegas, Dezzy’s drug abuse is accompanied by sudden changes in the visuals of each scene. From the colour scheme and camera angles to the fast paced editing and distorted sound mixing, every aspect of the drug scenes is carefully crafted to make viewers feel as if they’re as drugged out of their mind as Dezzy. While the story isn’t too deep, it’s fast-paced with a short 80-minute runtime that causes most of the film to feel like a third act with the intensity it displays.

If you’re disturbed by gore or psychedelic visuals, skip out on this one. On the other hand, if a drug-induced horror film with amazing visuals to the tune of rock and synth music sounds like a good time to you, I’d highly recommend Bliss as a film that will deliver on that premise.