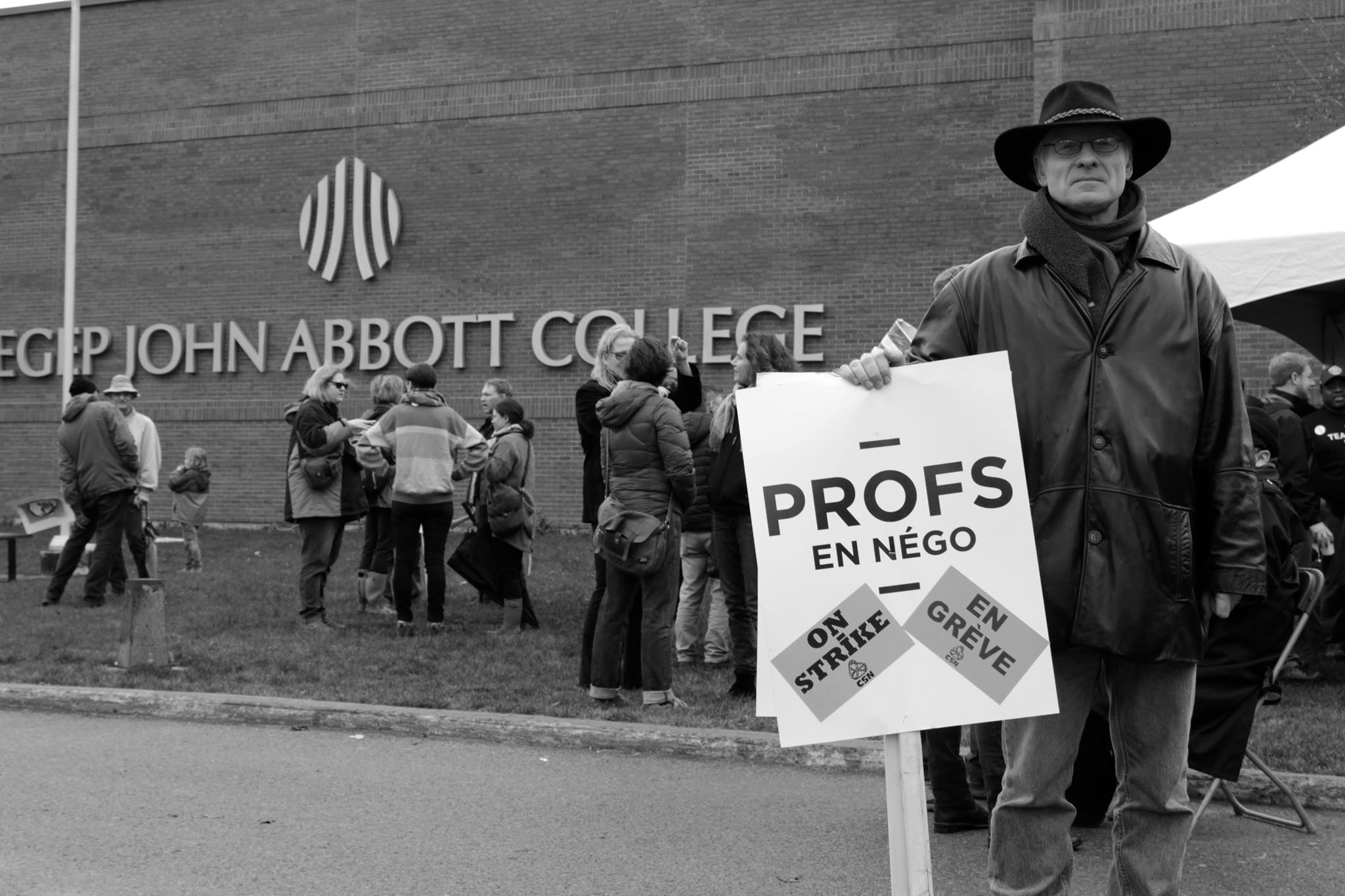 Despite the weather conditions, the teachers of John Abbott College gathered together to put pressure on the government for a fair working contract.

Thursday October 29th, 2015 was the first day for schools and colleges of the public sector on the island of Montreal to strike. At John Abbott College, teachers started to gather from eight o’clock in the morning and had a rotation schedule of three hours each, which brought the strike to an end around four o’clock in the afternoon that same day. “Solidarité, teachers matter!” were the words of a six year old boy, who was on site supporting the cause alongside his mother, a teacher from the English department.

At the beat of a drum circle, hot coffee, processions, and the spirit of unity, teachers stood under the rain, in the cold, to fight for what is important to them: education. The government wants to implement cuts in the education sector. As a result, the cuts will affect the working conditions of teachers, their salary, the students and their study conditions.

According to Caroline Senneville, president of the FNEEQ (Fédération Nationale des Enseignants et des Enseignantes du Quebec), the salary increase the government suggested is so insufficient, that it doesn’t even account for inflation. Teachers will have to work more hours to get paid less.

Mr. Wayne Tijal’s biggest worry concerns are pension plans. They used to be based on a five year salary average. The new plan will be based on an eight years salary average. This affects the amount of money because salaries increase over time. Averaging over five years, takes into account four years where the salary was lower than the fifth year; but averaging over eight years is seven years of lower salary before the eigth.

These are difficult times for the public sector as the goverment wants to implement budget cuts, but is it really a just about the money? Some say it is not but rather a lack of interest. The goverment is prioritazing other issues that are leeding coorporations to take a stand in the matter by investing in educational programs. Therefore, public education is slowly getting privatized.

Some of the measures that the goverment wants to take are to increase the number of students per class, have a cut in the service of special education and an overall decline in teacher’s ability to address the needs of students.

There is hope for the new federal government to invest in education and make it a priority. After all, it is beneficial for the future of this nation. Meanwhile is up to the teachers to “Fight for the Future of the Public Education System”, as spoken by Tania, a member of the Teacher’s Union.

Overall, the strike day at John Abbott College went well, students and cameras however were the elephant in the room. If the goal of the strike was to get people’s attention, the media sure did not get the memo.

This article would not have been possible without the help of Alberto Sanchez, Erwin Regler, Roy Fu, Roxanne Dupuis and Ryan Young.