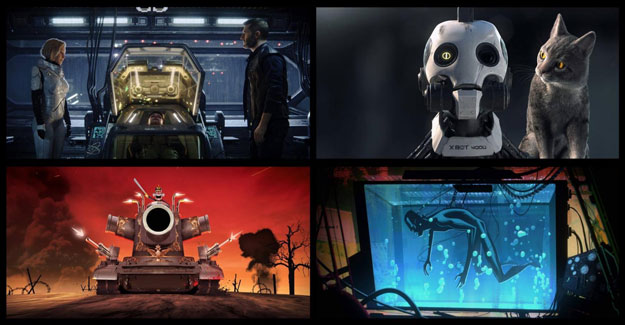 Adult animation is something that I find goes extremely unappreciated. When people look at animation they tend to look at it as “just another cartoon” and often perceive it as immature. It doesn’t help when adult animation is limited to comedy. Don’t get me wrong, I love a good animated comedy, but the medium has so much more potential. Animation can achieve heights that live action could never reach, and I am always wishing for this potential to be fufilled.
Thanks to Netflix and producers Tim Miller (Deadpool) and David Fincher (Fight Club, Gone Girl, Seven, and many more), we have Love, Death & Robots, an 18-episode adult animated anthology series, which is something I’ve been waiting for a long time.
Like the majority of Netflix viewers, I like to binge-watch and occasionally take breaks. However with the case of Love, Death & Robots, I went through the entire series without stopping. I was hooked from start to finish. I found myself riveted by every episode in some way, shape or form. The animation is top-notch and also extremely diverse with a wide variety of styles.
What I appreciate the most about the series is that it does not shy away from anything. The beauty of online streaming services is that they allow for a creative freedom that was not around years ago. I was astounded by the sheer creativity that this show produces, and it gives me hope for the future of adult animation. Not to mention, it’s absolutely bonkers.