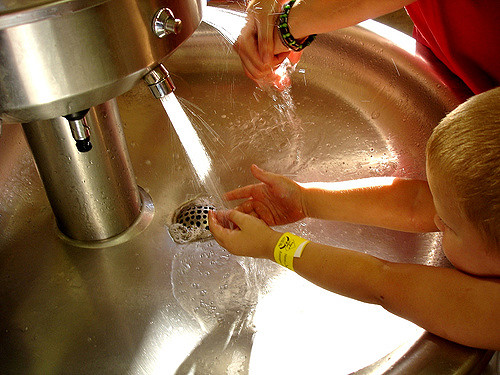 A Petty Complaint About Water Pressure

In the grand scheme of things, there are plenty of things that generally get people riled up. For example, politics and religion come to mind. Every once in a while, though, there is something that comes up that is so insignificant, people roll their eyes.

My current complaint, among many, is about water pressure. In a world aiming to be more environmentally friendly (and economically conscious for that matter), it is nearly impossible to use a sink without excess soap left on your hands at the end. I understand the arguments for having to “save the planet” and “ensuring the survival of our and other species,” but what use is reducing the water pressure such that it takes me way longer to wash my hands? I would walk up to a sink, rinse quickly, dispense soap, rinse again, walk over to the hand dryer, realize there is still soap on my hands, re-rinse my hands, walk back over to the hand dryer, and dry them one last time. It doesn’t help that many bathrooms use extremely dense soap as opposed to other products, such as the foam hand soap, which takes infinitely longer to wash off.

During the “study break” (which was really a break in which I had no choice but to “study” and write multiple research essays), my family and I went on vacation for a few days at a nice hotel, nothing special. It was one of the cheapest in the area, and served us well. Well, except for the shower. You see, the shower was one of those bathtubs with a hose attached to it. So, I turned on the water and hopped in. The water was spread so thin and at such an inconsistent rate that I remained mostly dry the entire time. While my hair, albeit thin, would normally be drenched, it wasn’t dripping in the slightest. The soap bar was overly “soapy”, per say, and the shampoo was impossible to rinse out. I feel sorry for anyone who would try to shower with longer hair than I mine, which is most assuredly everyone. I understand the hotel’s reasoning in this situation: it doesn’t want to spend more on expensive plumbing and there is a need for saving resources on this planet. The generic products they provide are bought in bulk and are often of a lower quality. It still irks me every time I stay at any hotel.

On a similar note, these “hands-free” sinks are driving me up the wall. As opposed to “old-fashioned” sinks, modern technology has made it so that we merely pass our hands in front of a sensor which dispenses water. There is a problem: there is no pressure or temperature control. At times, the water pressure is simply abysmal. Other times, it’s impossible to use without water splashing everywhere, drenching your shirt or coat in the process. Meanwhile, some sinks heat up so incredibly quickly that attempting to wash your hands for longer then three seconds simply turns the water scalding hot, forcing me to play “musical sinks,” alternating between each of them. Don’t even get me started on when the sensors simply don’t work.

So, in the grand scheme of things: is this life threatening? Nope. Is there any reasonable justification for this argument? Not really. Is this a “first world problem”? Most definitely. However, there is something I want to make clear in all of this: we are social creatures. We humans often like to talk, and sometimes want to be heard. While someone may be ranting about a problem that may be insignificant, sometimes just listening to someone’s opinions and feelings is all that is necessary. They don’t want a response; they just want to be heard.