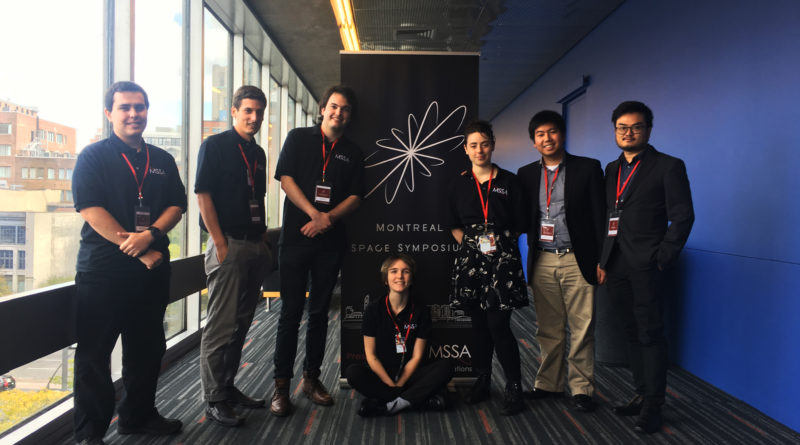 October 18th and 19th marked this year’s Montreal Science Symposium, held at the Concordia Conference Centre at John Molson School of Business. The symposium was organized and led by the Montreal Student Space Associations (MSSA). MSSA is a student driven committee comprised of a multitude of student space and aerospace organizations and clubs from a diverse selection of Québec universities, including Space Concordia, McGill Space Institute, Oronos from Polytechnique Montréal, and rockÉTS, the student run aerospace group out of ÉTS. The symposium was a platform for science presenters from varied backgrounds, including astronomy, astrophysics, engineering, and the aerospace industry, just to name a few, to give brief twenty minute presentations on space and the state of the industry, in an attempt to fulfill the goal of this year’s symposium: to bring space down to Earth.
Among the wide array of presenters were some of John Abbott College’s very own professors. Professor Karim Jaffer gave two audiovisual presentations: one discussing student involvement at the college’s active astronomy club, as well as the astronomy course offered at John Abbott College (highlighting specifically the way astronomy students engage with course material outside of class). His other talk was about John Abbott’s partnership with the Royal Astronomical Society of Canada, a partnership which bore the fruit of public engagement and outreach. Among other things, John Abbott’s collaboration with the RASC has brought the John Abbott College Eclipse event of 2017 to life, as well as taking part in this year’s Townsend Lecture, at which Canadian Space Agency mission manager Steve Iris spoke about his involvement in the Canadian RADARSAT Constellation Mission. Two more lectures were also given by John Abbott professors, including a presentation which put a bold artistic twist on astronomy, given by Professor Sheila Nadimi, a professor in the Arts & Science program at John Abbott. Professor Nadimi spoke about the ways her students engaged with astronomy and space through art. She highlighted how the students used the library of the Royal Astronomical Society of Canada, hosted at John Abbott College in H-355, to inspire themselves to create art pieces ranging from bold fashion pieces inspired by the stars and nebulae, to the music made from the celestial sounds of outer space. Dr. Richard Léveillé also gave his own talk about exploring Mars with the Curiosity rover, speaking about how Curiosity does its exploration, the robot’s pivotal findings and how it will affect humanity in its near future. Finally, Emilie Lafleche, a John Abbott alumna, gave her own speech about teaching science and astronomy to a youth audience. Of course, thirty minute breaks were spaced intermittently between talks to allow for networking between attendees.
On Thursday, for students in high school and CEGEP looking towards Concordia, a tour was given of Concordia’s engineering and space facilities, including a tour of Concordia’s engineering wing, and state of the art laboratories used by materials, aerospace, mechanical, and civil engineers alike. Thursday’s events were concluded by an evening cocktail networking event at the Ritz-Carlton.
This article really only scratches the surface of the events that took place at the Montreal Science Symposium over the past two days. There were far too many exciting and engrossing speakers and topics to be able to cover them all in a single article. In the advent of the success of this year’s symposium, here’s to looking forward to next year’s event.