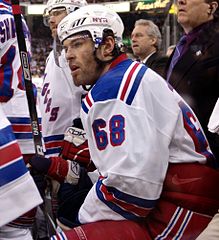 Owen Nolan was drafted 1st Overall in 1990, and with 1200 NHL games played and 885 points, most would say Nolan was a good first overall pick… until you hear that Jaromir Jagr was drafted 5th.

Despite being 44 years old, Jagr leads the Florida Panthers in points this season and has been a large contribution to the team’s success. His success this season is only a small hint of how great he’s been over the course of his career. He is currently the 3rd all-time point leader in NHL history, behind Wayne Gretzky and Mark Messier. He sits less than 30 points behind Mark Messier for 2nd all-time and surpassing Messier before he retires is more than likely. Furthermore, Jagr also played in the KHL for 3 seasons (2008-2011) before returning to the NHL for the 2011-2012 season. If Jagr never left the NHL, he would have already surpassed Messier.

Jagr won 2 Stanley Cups with the Pittsburgh Penguins in 1991 and 1992. He also won the Art Ross Trophy (Most Points) on 5 occasions (1995, 1998, 1999, 2000, 2001) and was named to the NHL All-Star game 13 times. His most recent AllStar appearance was this season in Nashville. He was voted by the fans to be the Captain of the Atlantic Division team. He won the Hart Memorial Trophy as the league’s MVP in 1999. He also won the Ted Lindsay Award as the league’s MVP (chosen by