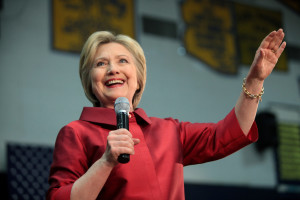 The Harsh Risks for Women to be Represented by Hillary Clinton

This year’s election campaign for the presidency of the United States has taken the world by storm. We have, once again, been made witness to the scandalous and dishonest lives of politicians aspiring to take on such powerful positions. Though, as Canadian citizens, this may not seem like much concern to us, but we must remember that the United States’ actions affect Canada as well as many other countries around the world. Therefore, this year’s election, which is on November 8th, is an international concern that everyone should be paying attention to.

I have been watching this electoral campaign from the very beginning, as it has been a huge and recurring topic on the news. These days, all we hear about are the polls and new scandals centered around the presidential candidates, Hillary Clinton and Donald Trump. I found it quite awful how every time I asked others about this election, they told me that, at this point, people must vote for “the lesser of two evils”. I understand that both candidates have their faults, and, if I had to choose one, it definitely wouldn’t be Donald Trump.

However, I can’t help but feel concerned as to how people make up their mind to vote for a candidate, considering the fact that this may very well be the first time in history the United States has a female president. This would be quite an achievement for feminists all around the world. However, I think we can all agree that being elected because you were considered the “lesser of two evils” isn’t a good thing, and may very well have a negative impact on women who aspire to go into politics in the future.

Now, I know that Hillary Clinton has a lot of things that make her a worthy presidential candidate. For instance, her experience as Secretary of State and First Lady would definitely prove to be useful as president. Furthermore, she has detailed plans on the actions she will take if elected as the next president. Finally, she is seen as a capable politician. However, even without considering her husband, she is surrounded in scandals that have made her look untrustworthy as well as irresponsible. For instance, one subject that has been talked about a lot on the news most recently is the scandal surrounding Clinton’s emails. She was found sending top secret information through a private email server while she was Secretary of State, which endangered the United States national security.

Of course, every politician has their own share of scandals, but as a woman in a field where sexism still lingers, these will be judged much more harshly and could be considered as women having too much power. This is extremely important to keep in mind, and everyone must understand that if Hillary Clinton is elected as president, all her actions will be criticized and oriented towards her sex by the media. Therefore, she will become the representative for all female politicians in America and maybe even around the world, and depending on her actions, she will have an impact on how women are viewed in politics which may increase sexist views against women in positions of power.

Overall, if I was U.S. citizen eligible to vote, I would choose Hillary Clinton instead of Donald Trump over and over again. However, I believe we must keep in mind the risks we are taking in potentially making her the representative of women in politics as Mrs. President of the United States.