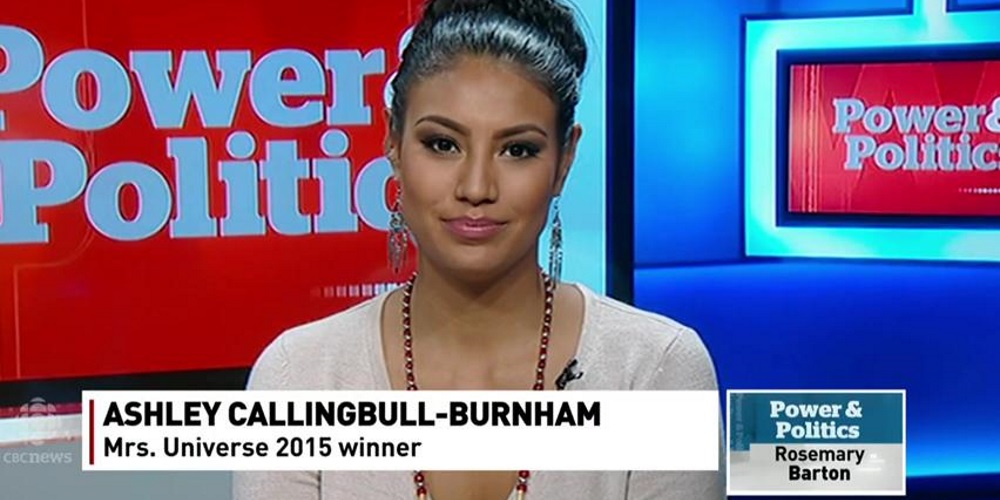 Only two days after winning her title as Mrs. Universe, Ashley Callingbull-Burnham took to social media to encourage First Nations Canadians to vote in the next federal election; more specifically, to vote out the Harper government.

On August 29th, Callingbull-Burnham, who is from the Enoch Cree Nation of Alberta, became the first Canadian and First Nations woman to win the international beauty pageant (Global News). She quickly saw her chance to use her newfound fame as a platform and jumped onto the political scene. She tweeted, “I urge all First Nations people in Canada to vote in this upcoming election. We are in desperate need of a new PM. Fight for your rights.”

Since this initial statement, she has called out the Conservative government for their lack of involvement in Canadian aboriginal communities. In an interview with CBC, she addresses the issues of housing, clean water, and education within First Nations communities. She calls out the environmental risks that a pipeline would bring, and the fact that they are treated like terrorists when they try to do anything about it. She also demands that the government address the issue of all the missing and murdered aboriginal women. “We’re always put on the back burner, and I don’t agree with that whatsoever,” she says.

Of course, critics didn’t shy away from commenting on Callingbull’s contribution to the debate. However, she is committed to making a difference. She brushed off these negativities, writing to Facebook: “Did you really think I was going to just sit there and look pretty? Definitely not.” She has shown that she is far from a stereotypical beauty queen.