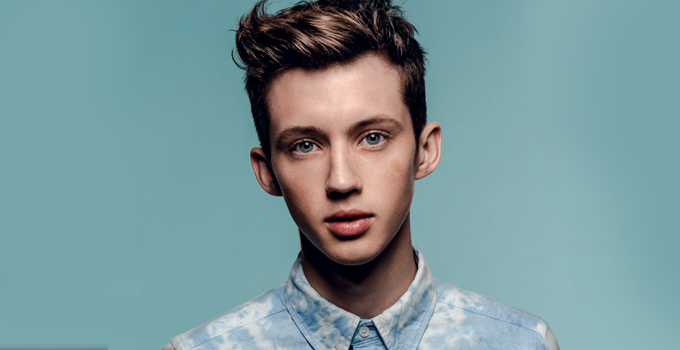 You know that achingly adolescent feeling of being stifled and trapped within the protective suburb streets of youth – longing for the excitement of the unknown – and yet never wanting to leave behind the safety and memories of the familiar? Up-and-coming pop artist Troye Sivan has distilled this exact sensation into a debut album that shines with utter brilliance.

Blue Neighbourhood is both a love letter to the hometowns we leave behind as we grow up, and an expression of the optimism-laced freedom that comes with escape. Troye’s honeyed vocals, lingering in the golden space between boy and man, breathe sultry life into lyrics that read like narrative poetry.

The 16-track deluxe edition is a work of art that runs the gamut from sleepy love songs and breezy reminiscences to upbeat radio anthems. Similarly, the album’s electronic production varies from subdued melodies to complex dance music. While the track titles are stylized in capital letters—save the spunky “for him.”—the overall mood of the album is on the softer side.

Though highlights are difficult to pick, as no song falls flat and each is totally distinct, the standout tracks in terms of success are surely “YOUTH” and “WILD”, the former charting worldwide and the latter serving as the lead single off Blue Neighbourhood’s prelude EP, Wild.

“FOOLS” and “TALK ME DOWN” conjure up images of vulnerable young love; the lyrics could almost be pillow talk. Troye turns introspective in the spirited “COOL” and “LOST BOY”, pondering the ways we change ourselves to impress those we love, or want to love. An embodiment of the album’s titles and aesthetic, “SUBURBIA” evokes hazy feelings of late-night drives and overtired conversations with friends. The album’s hidden gem is “BLUE”, a wistful duet with Troye’s writing partner Alex Hope.

Arguably the album’s most poignant track, a collaboration with Betty Who called “HEAVEN”, is a rumination on how to reconcile sexuality and religion. In it, he ponders, “Without changing a part of me/ how do I get to heaven?” Troye publically came out as gay in a YouTube video that has amassed 6.5 million views since it was uploaded three years ago, and he unabashedly uses male pronouns in his love songs.

Same-sex narratives are rare in mainstream music, with artists like Sam Smith—the self-proclaimed first openly gay man to win an Oscar—continuing to shy away from overtly expressing their sexualities. Without alienating any fans, Troye celebrates his sexuality. A trilogy of music videos accompanying his EP Wild followed the hardships of his relationship with a boy. At a recent concert, he helped a fan in the audience come out as bisexual to her mother.

As a YouTuber and genuine young person, Troye is burdened with the duty to be a role model for teenagers around the world. And yet, he manages to deliver beautiful music and an inspiring message without compromising one for the other. His critically lauded debut with Blue Neighbourhood is certainly a good sign that Troye Sivan has nowhere to go but up.