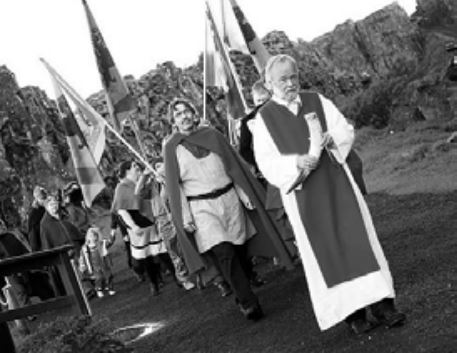 Some controversy in this construction has at least one pagan community unsettled with what this might mean for the future of neo-paganism. According to thedailybeast, Hilmar Hilmarsson, the high priest of this new Icelandic temple said, “I don’t believe anyone believes in a one-eyed man who is riding about on a horse with eight feet.”

I’m part of this neopagan spectrum, falling in the Gaulish variant of Celtic Reconstructionism, and this comment had made me sick to my stomach. This new temple could be the foothold of the neo-pagan cause, but what Örn had said instead, trivializes paganism as a whole, suggesting those who actually believe in the Old Gods as actual beings rather than metaphors are to be laughed at. A member of the Gaulish Polytheism Facebook community said, “Good we got a temple in the works. Not good that the guy is belittling Hard Polytheism.” Pagans have faced discrimination ever since Christianity had taken hold of the Roman Empire. Though in the modern era, people have fortunately moved past lynching homosexuals, various ethnicities, and freethinking women.

It has allowed these groups to move forward, but pagans were left behind. Back in January, a statue of Manannán Mac Lir, an Irish sea god was stolen from Binevenagh Mountain in Ireland with a note left by the thieves saying “You shall have no other gods before me.” Police are “taking into consideration” that religion could play a part in this crime, despite the obvious reference to the Ten Commandments. Patrick Carberry, a pagan priest living in Belfast shares a similar opinion to the crime. “If a pagan stole a statue from a Christian church and left a pagan one in its place it would make the world news.” He told the Londonderry Sentinel.

Returning to the Icelandic temple, this could still be the break into the international spotlight paganism so desperately needs. More than anything, we need people to know we exist. The temple recently released an update about the upsetting statement by Hilmar Hilmarsson. They’ve said that the quote was taken out of context, and that people vary their own approach (to paganism). To this update, another Gaulish Polytheism Facebook community member has said, “Good they see that they clarified it. Unfortunately, this statement just leaves me further frustrated with them. Mostly for technical issues.”

Myself, I still remain skeptical of what this means for the future of paganism as a whole. But I think that as long as we are all represented fairly, and everyone’s individual approach is treated respectfully, this new temple could help bring paganism into the modern era and lead to the construction of many more around the globe.