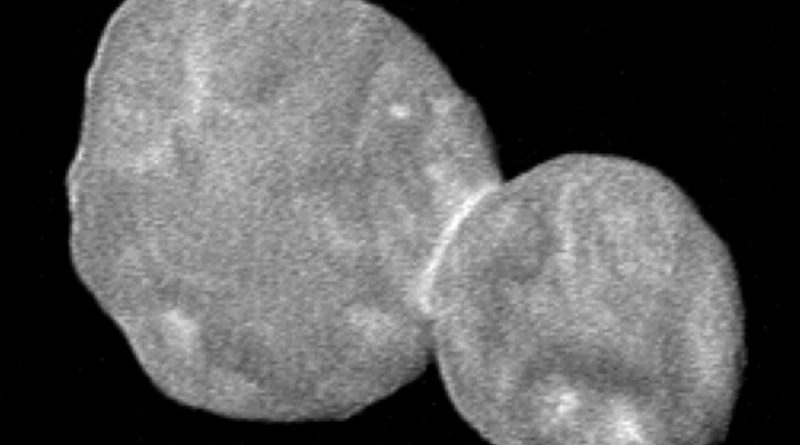 On January 1st, confirmation of New Horizon’s successful flyby asteroid Ultima Thule was received. Signals from the probe were picked up by one of NASA’s antennas in Madrid, Spain. The signals took six hours to arrive to Earth since the craft is now 6.5 billion miles away in a region of space called the Kuiper belt that surrounds our solar system.
NASA’s New Horizons probe was launched in 2006 and flew by Pluto in July 2015. It had since been travelling to asteroid Ultima Thule. The ‘snowman’ asteroid, thus dubbed on account of its shape, was the chosen target because of the freezing temperatures of the belt that stop chemical reactions, the small 35-km size of the asteroid that prevents it from undergoing geological processes, and the low collision rate in the area it orbits, which all make the object nearly identical to when it first formed, thus providing a clue to the state of the early solar system.
New Horizons will spend the next twenty months sending all the data from its full memory to Earth. It will take so long because the probe’s transmitter can only send information at one kilobit per second.
As scientists begin analyzing all the data coming from the probe, a mission extension will be asked of NASA since New Horizons still has enough fuel to visit a second object in the Kuiper belt. The probe’s plutonium battery will provide it with enough energy to last into the 2030s and could even let it record its exit of the solar system. Now moving at 14 km/s, New Horizons will be the third such craft to leave the solar system. It will follow Voyager-1, the first man-made object to leave the solar system and that is moving at a rate of 17 km/s, and Voyager-2, which left the solar system in November.