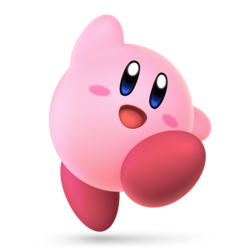 When people think of Smash Bros., there appears to be three characters that come to mind: Mario, Kirby, and Fox. These three fighters have been seen in all five smash games thus far, and all have certain levels of difficulty to play (and even more to master). There is, however, a fighter among these three which is the friendliest to newcomers: the lovable puffball Kirby. Since they’re the prized creation of Masahiro Sakurai, the same man who made Smash in the first place, it’s no surprise that Kirby constantly struggles with favouritism issues. Whenever they get buffed, people always say that they were only buffed because they’re ‘Sakurai’s favorite’. This is the exact same representation the lovable pink hero got in the original Smash game, to which Sakurai responded by making them the worst character possible in Melee. The exact same song and dance happened with Smash Bros. Brawl and Smash 4, and people wondered whether or not Sakurai would repeat the cycle with Smash Ultimate. Today, I’m here to discuss Kirby, and some reasons why they’re known as Sakurai’s favorite, as well as their moves and how to properly play as them.
To start, the biggest attribute that we can associate with Kirby is simple: they’re one of the easiest characters to pick up. Since the roster is both intimidating and complex in Smash Ultimate, your head will certainly spin every time you look at it. “Will I be as good as them? What will my opponent pick? What can counter this?” Many new players will take one look at the roster and be quickly intimidated. This is where Kirby comes into the mix: they’re simple, fun, and exciting to play. They have average methods of dealing damage and average methods of confusing opponents. Combine that with their multiple jumps and relatively good recovery, you have yourself the peak of a beginner-friendly character.
What differentiates them from other beginner characters in other fighting games is that there are ways to play Kirby competitively. Since they’re a very aerial character and have multiple jumps, they can very easily edge guard opponents, which is a very important attribute in Smash games, especially Smash Bros. Ultimate. As well, their ground game is a rather open bag with their ability to copy the neutral specials of other fighters. If you’re fighting against a character with a notably good neutral special, such as Samus, Pac-Man, Olimar, Wii Fit Trainer, or Lucas, you get a very big boost in timing and pace. These moves heavily reward perfectly timed attacks that can only work if you know how to combo as Kirby. The other side of this is if you have the neutral special of Fox, Mario, Luigi, Palutena, or Falco, you don’t have as big of a reward for timing, but you have a solid and easy way to rack up damage.
Overall, Kirby will always have that curse of “are they too overpowered/are they not overpowered enough?”, and will almost never be seen in competitive play. Unlike previously discussed fighters like Little Mac and Mewtwo, Kirby will never have that level of competitive play. However, this option is so much better, as they will never have any stereotypes associated with their character, especially not on tier lists. Kirby will always remain in their favourite place: as a beginner-friendly pair of training wheels. If you’re just starting to play Ultimate, or are picking it up after a while and don’t know who to choose, Kirby is definitely the character for you.