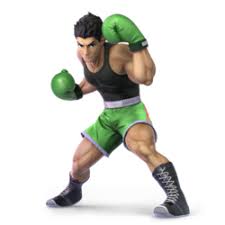 The Boxer from the Bronx

For as long as Smash 4 has been out, Little Mac has been a laughing stock. People have been using him incorrectly and wrongly, assuming him to be complete trash. With the release of the new aerial-focused engine in Smash Ultimate, Little Mac truly struggles to keep up with the other fighters. With movement being based on aerial play, along with many attacks launching you much more easily than in Smash 4, people have gone so far as to make the claim that Little Mac is the worst character in the game. However, what Smash Ultimate also offers is that any character can be good if they are put in the right hands. Anyone can be good if the player understands the character’s strengths and weaknesses. With Little Mac, this saying cannot be more true. In this article, I will be displaying Little Mac’s strengths, weaknesses and play style. I will be demonstrating how to properly play as Little Mac and, most importantly, showing you that there’s more to this Boxer from the Bronx that meets the eye.
Some people boil down Little Mac’s gameplay to be “good on the ground, bad in the air”. This statement, while being very true, is often seen as being a bad thing. No matter how you interpret it, there’s no lying. No one has a brutal ground game quite like Little Mac. For one, he’s ranked as being the third fastest character in the game, only behind Captain Falcon and Sonic. When you combine this with extremely quick and strong attacks, you get a very good rush-down character that can brutally pressure an opponent. Little Mac’s jabs and tilts come out ridiculously quickly, with some coming out on frame 2 or even frame 1. As well, Little Mac’s smash attacks are not only powerful, but they also come with super armor. This means that you take damage, but you don’t flinch. This is amazing for a character to have.
Another great factor of Little Mac is that he’s extremely friendly towards newcomers. Most character in Smash are meant to be played by veterans of the game. When you enter into Smash Ultimate for the first time, not only can it be daunting to find a good character to play, but it takes a very long time to get experienced enough to win your first match. Little Mac is a generally easier character for people to pick up as they get to focus more on speed, agility, and power rather than worrying about aerials. He does this while still having enough skill for veterans to enjoy. Whoever you are, Little Mac is always a good choice.
However, with all these strengths, you need to have weaknesses. For Little Mac, that would be his aerial game. All of his aerials, while being moderately quick, aren’t powerful in the slightest. Because of them, Little Mac has next to no options for ledge-guarding or combos. Also, Little Mac’s recovery, while better than in Smash 4, still struggles to get any distance. However, this issue can be countered by Little Mac’s semi-floatiness, along with the game’s natural ‘magnet hands’. Besides his aerial game, Little Mac also struggles with taking damage. In the boxing world, he’s known as a swarmer: someone who focuses on getting fast meaty hits on the opponent, but leaves themselves wide open for counterattacks. Little Mac can dish out a lot of damage, but if he missteps, he can potentially be in a lot of trouble.
I do hope that more people try out the different areas and characters that this game offers, even if it extends outside of their comfort zone. This includes characters that most would consider to be bad. However, if you like a challenge of picking a low-tier or an underdog, he’s perfect for you. Or, if you want a character that’s speedy, has a lot of mix-ups, and has both a defensive and offensive play style, Little Mac is definitely your guy. Talking from a casual standpoint, if you want a character that can be easy to pick up yet provides a challenge to get good at (or if you just want a character that can provide some amazingly stylish kills), Little Mac is the character for you.