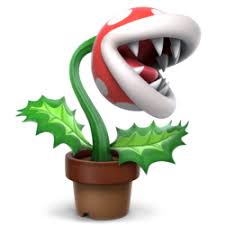 Piranha Plant is now in Smash Ultimate, which is something I never thought I’d say. Although it’s considered by many to be bad, it does have its moments as well as the moveset necessary to not only play casually, but also competitively.
As a start, Piranha Plant reigns supreme when it comes to range, as his Down Special, ‘Long Stem Strike,’ is the longest reaching non-projectile attack in the game. It also excels in raw power, as its Neutral Special, ‘Ptooie,’ comes out quickly, has very little recovery time, and provides both a wall and a distraction for it to use when it’s in trouble. Other notable moves are its Neutral Aerial (which comes out quick and can ledge-guard effectively) and Forward Aerial, which can effectively combo into a few of Plant’s other options.
What sets Plant off for some people, however, is both its abysmal lack of out-of-shield options, speed, and good moves. Forward-Tilt is almost useless, Back Air leaves you in odd spots, and it can never seem to keep up with aerial fighters. It is also defenseless against pressure characters like Pikachu and Roy.
Piranha Plant offers a unique playstyle, similar to Wario and Wii Fit Trainer, by being a powerful joke character. While Piranha Plant isn’t very strong, it can still hold its own against rather powerful foes. If you’re looking for a good ranged fighter with many options for confusing the opponent and enough kill power to back it up, then Piranha Plant is the character for you.