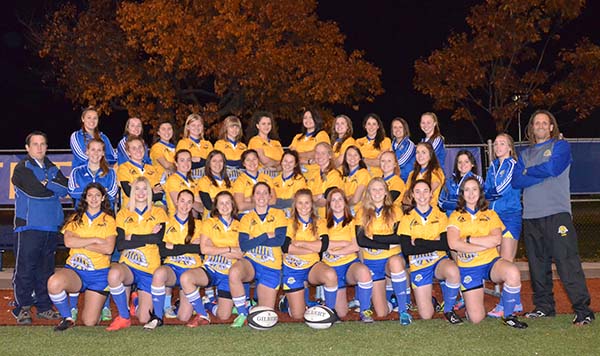 With the end of the school year so near, John Abbott held its annual Sports Banquet to appreciate our many hardworking athletes.

Outstanding Performance Female: Dana Silerona, Women’s Rugby. With 10 tries, 15 conversions and 2 penalty kicks, Dana was one of the key pieces of the Undefeated Women’s Rugby team! She was named a RSEQ League All-Star this season. Dana said “I’m honoured to receive this award, given the calibre of the other nominees, and I am grateful for the support of my teammates and coaches. Without them, none of this would have happened.” Dana’s Islander days are over as she will be attending McGill next year!

Outstanding Performance Male: Keevon Small, Men’s Basketball. Keevon won the award last year and with 21.1 points per game, 7.2 rebounds per game, 2.7 assists per game and 2.4 steals per game, he deserved it again this year! He was named the RSEQ Player of the Year this season. Keevon said, “It’s an honor winning the award for two years straight. The only other person to do so (in basketball) was my brother, Anthony Moore from ‘06-’08, and he was a great player. This has been a great 3-year experience that I will never forget.” Keevon’s time as an Islander has come to an end as he’s off to Ryerson next year!

Team of the Year Nominee: Men’s Lacrosse. After winning the Championship last season, the pressure was on for the Men’s Lacrosse team, and needless to say they raised the bar! After finishing the regular season 8-0, they played the Dawson Blues in their first playoff game. They won 21-4 to earn themselves a spot in the Final against Brebeuf. Brebeuf finished the regular season 6-2 and were ready to play. Unfortunately for them, our Islanders would let nothing stand in their way and won the Championship game 17-3!

Team of the Year Nominee: Swimming. In 7 events this season, our Islanders never placed lower than 2nd place! Our Men finished 1st in all 7 events and our Islanders performance was outstanding on December 4th. Our Islanders won 13 medals that day and the Men and Women both won 1st place in front of our hometown fans as the event took place at John Abbott!

Team of the Year: Women’s Rugby. This year’s team of the year award went to our Women’s Rugby team who redefined excellence. After finishing the regular season 6-0, they went on to play Heritage in the first playoff game. Winning it 21-0, focus turned to the Finals against the Dawson Blues. The Blues went 4-2 in the regular season, but that wouldn’t be enough to stop our Islanders. Our Islanders went on to win the game 25-3 taking home the Championship!