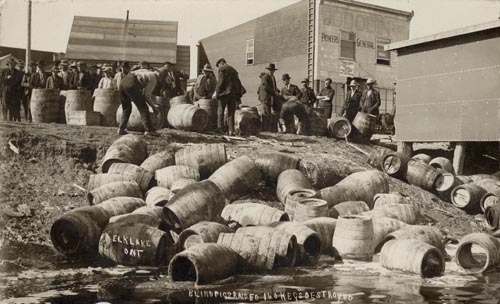 Packs a Punch Harder Than a Shot of Whisky

One year has passed since the 18th amendment was integrated into our Constitution. Starting today, we are prohibited from manufacturing, selling and transporting intoxicating liquors. Going against the 18th amendment will hereby consist of an illegal act and if caught doing so, the individuals involved will be arrested.

I have to say that though our government wants to cut access to alcohol, New York and its citizens will never bow to that law. Alcohol is essential to the night life for which the magnificent city is known for. The lights of New York are supposed to shine bright compared to other cities in the world. To submit ourselves to the will of old men will only result in crippling the city’s economy due to possible impacts on tourism and citizens’ expenses.

One reason why it is unfortunate that alcohol is now illegal is that our access to alcohol will depend on bootleggers and powerful gangsters. But if you were to ask me what I prefer between letting the city die, and giving the monopoly of alcohol to mobsters, I choose the latter.

One positive thing is coming out of this; we’ll make some new friends with our neighbors to the North. This is because they don’t just produce maple syrup… they also produce alcohol.

But in all this, I am confident that the law will not be able to weaken our spirit. New York and New Yorkers will prevail, and will keep living on as usual.