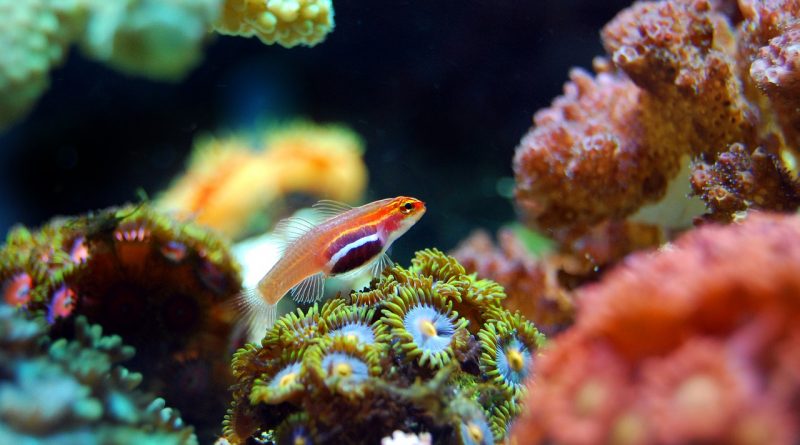 There are between 6000 to 8000 species of fish and 800 species of hard coral in coral reefs. While these reefs are a very small part of the ocean, they are the most diverse marine ecosystem.
Mutual dependence, also known as symbiosis, is a relationship of benefit between different organisms. Similarly to the bee-flower relationship, coral reef fish depend on the coral for their nutrition, and coral depend on those fish for their reproduction.
Corals are not only a very important part of fish nutrition, they are also an important shelter for all these species. The Australian Institute of Marine Science explains that the rapid decrease of corals in coral reefs has resulted in the loss of many fish species, and its studies have found that fish living in the corals might not be able to adapt to new habitats, resulting in their death. The corallivorous (that which feed on coral) fish lose their main source of food, and all coral-dwelling fish find themselves more susceptible to predators.
Corals on the other hand depend on fish in order to reproduce themselves and fight off their natural enemies, seaweeds. Corals, who tend to be stationary animals, can reproduce sexually or asexually depending on the species. Asexual species will create buds on themselves that once mature will detach and become a new organism, while sexual species will release gametes into the water to create microscopic larva.
Herbivorous fish living in coral reefs, such as the parrotfish, serve two closely related purposes to corals. These fish, with their beak-like jaws, eat the seaweed growing on corals and reef substrate. On corals, seaweed acts as a filter and steals some of the light the coral needs to survive, and on the reef substrate, algae will reduce the chances of larva settlement, inhibiting the corals’ reproduction.
Many coral reefs have seen their species’ numbers decrease at an alarming rate with the raising of water temperature, pollution, overfishing and the changes of ocean pH. Being mutually dependent in such a fragile habitat can be a disadvantage for both members, since the decline of one will result in the death of the other.