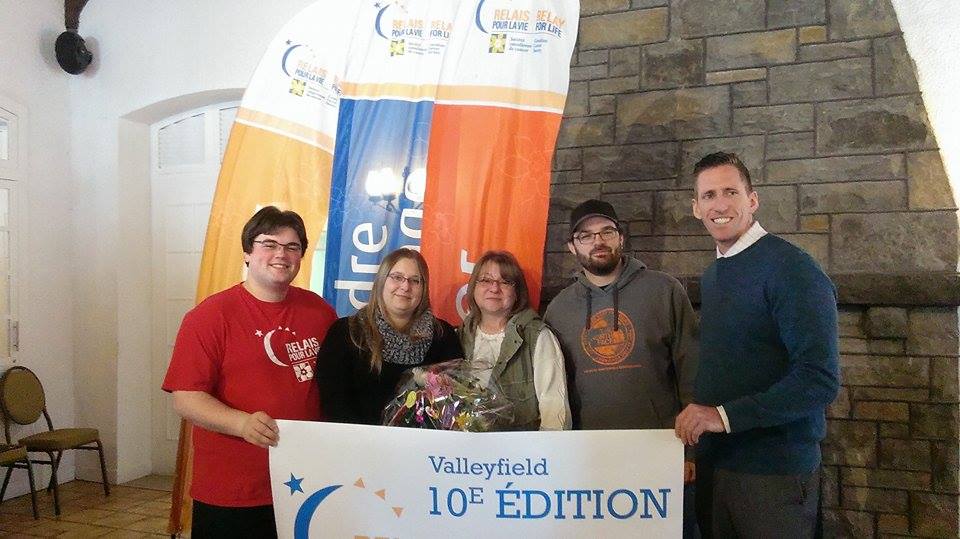 February 18th, 2016, a press conference was held in the Delpha Sauvé park in Valleyfield. Why? Because 10 years ago, a group of students introduced the Relay for Life event to this very town.

For those unfamiliar with the yearly event, Relay for Life is an all-night 12 hour relay race held in several municipalities in Quebec and Canada. The relay teams consist of 10 or more people that relay each other along marked paths. The goal is to raise money for cancer research and support groups and prevention efforts, says Dominic Roy, regional director of the Canadian Cancer Society.

Martin Bonhomme, Organizing Committee President for the Valleyfield Relay for Life, has been with the project since before it began: “As it is I have been a volunteer for the CCS for 10 years; since the first edition, actually, edition Zero.” He recalls that the project started thanks to Elisabeth Cloutier as a final project. It was a Youth rally, “by the youth for the youth”. The very next year, 2007, it had turned into a community event. At that time he was a volunteer, but two years later he became a part of the organizing committee. He then bounced around and worked in almost all the sub-committees before becoming committee president.

Steve Sauvé, a local reporter and public figure, recounts his battle with cancer (thrombopenia) and his experience with the Relay. In a later interview he was asked what made him want to be a part of the relay in the first place. He said it was the hope of it all. To see the survivor’s lap, 100 people in yellow shirts (survivors shirts), “and to know that those 100 people there are either fighting or have beaten cancer, you say, listen, that gives me hope. That‘ll happen to me too one day; I will be a part of those people.”

The main event of the conference, however, was Martin Bonhomme’s announcement of the upcoming relay (June 4th) and the improvements from last year. The first difference is a time shift: The relay will now be scheduled from 5PM to 5AM, whereas it used to be from 7PM to 7AM. The second is a survivor’s supper organized right before the race. The third is the extra dynamic animation, in honor of the 10th anniversary. Last but not least is a change in the running track.

The entire organizing crew was proud to announce that this year, 60 teams would be running, totaling more than 600 relayers, 100 of which are survivors. Again this year, they aim to be the greenest relay in Quebec and hope to gain the title of “healthy relay”.

Finally, Jonathan Levesque, also head of the South West office, tells us getting involved is as easy as going to relayforlife.ca, volunteering or showing up and having a blast.

This also holds true for the West Island Relay for Life. This year it will take place on June 10th from 7PM to 7AM at the George Springate sports complex.

For more details, feel free to visit their website at relayforlife.ca.