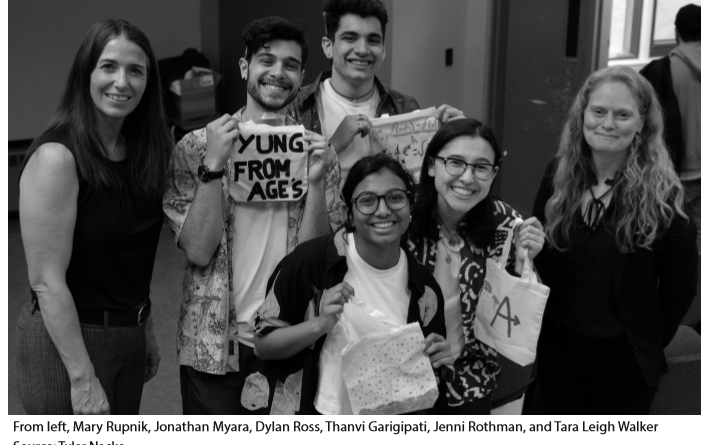 On April 11th, the Sandbox held their annual Pitch competition. This year’s theme was physical and mental wellness, which aimed to make a positive change in the lives of John Abbott’s student body. The evening event was hosted by Émilie Laflèche and Lucas Harvey, and the judges were Kennedy McKeeBraide (a current Liberal Arts student), John Halpin (the Director General of John Abbott College), Kareem Jaffer (a JAC physics teacher) and Jennifer Pragaï (a John Abbott alumna). The winning team was to be awarded a $500 award, whilst the audience favorite received a prize of $200.

Sapone is a locally-made eucalyptus plant-based organic soap distributor that was founded by Alessandro Chiricosta, Steven Robinson and Maxime Giroux. They aim to fight animal cruelty by using eucalyptus in their soap, instead of lard, the industry standard, while nevertheless using natural ingredients that don’t induce skin damage. So far they have made $180 in sales (of which a percentage was donated to the Loonie Line), which has allowed them to pay off their equipment. They have meetings planned with well-known health shops, such as Le Panier and Go Organique. Currently, one bar of soap goes for $5.00, and they hope to soon expand to a subscription-based service while maintaining the utmost quality of service!

Next up were Jenni Rothman, Thanvi Garigipati, Jonathan Myara and Dylan Ross, who presented an art workshop space at the college that allows students to express themselves, no matter their skill level. In doing so, they hope to bring calmness to students, increase their levels of happiness and make them actually WANT to come to school! They recently held an event, which was widely successful, with 77.7% of attendees saying that they would participate again. They’d like their next workshop to take place in a bigger space to allow for more participants!

The following Sandbox team to present was Pedal Power, composed of members Noémi Blom, Liliane Ma, Jessica Brandes, Connor Sin-Chan, Julia Zhang and Audrey Besner. They noticed that many students were stressed, had little time to exercise, and were constantly finding their devices to be low on battery. Thus, they proposed the purchase of eco-friendly stationery WeWatt bikes that transform mechanical movement into usable energy. Although a set of four bikes costs $20,000, they provide an aesthetic opportunity to exercise, study and be eco-friendly, all at the same time!

Abel Leonard Rolea was the last project to present, with one of the most energetic performances that humanity has ever witnessed. SUC’s solution to relieve students’ stress was to create an outdoor STM metro car (yes, you read that correctly) café where people could meet and consume coffee, tea, smoothies and juice that “fuels human relationships” as Rolea put it. Rolea put a strong emphasis on the café being an opportunity for volunteers to acquire hours for the SIR program, instead of creating a profit-based business. His aim in creating an outdoor café was to attract students outdoors and allow them to reap the health benefits of sunlight!

In the end, artanyway won the Pitch, but all the teams’ ideas and efforts were off the charts!