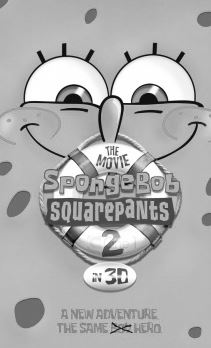 The Spongebob Squarepants Movie: Sponge out of Water is an animated movie released in 2015 by Nickelodeon Movies and distributed by Paramount. The movie features the talented voices of Tom Kenny, Mr. Lawrence, and Clancy Brown, and a live performance from Antonio Banderas.

At first, when I heard they were making a new Spongebob movie, I was immensely excited. I am a major fan of the 2004 original, and I wanted to see where this would go. However, my excitement deteriorated when I saw the trailer for this movie, as the majority of it was live action and CGI, which doesn’t really have a good track record when it comes to adaptations of cartoons. But this film taught me not to be so judgmental. To my surprise and my relief, about 80% the film is actually animated, with a much smaller portion being live action/CGI.

The movie has a very basic plot that you likely won’t find yourself getting invested in. However, this is not the movie’s intention. Its goal is to throw everything at you in the hopes of making you laugh, and this movie succeeds from many different angles from clever pop culture references, to random access humour, and to humour for children and adults alike. The Spongebob Movie: Sponge out of Water has something for everybody regardless of their age group. I had a great time watching it, and I’d definitely recommend it.