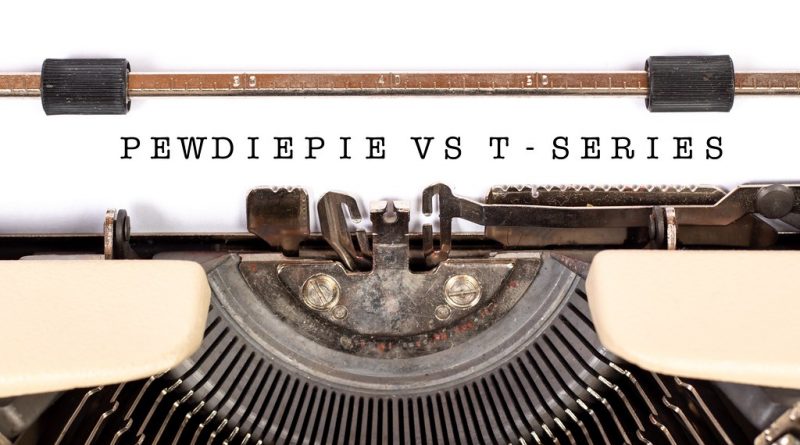 If anyone has been on YouTube in the past year, then they’ve probably heard of the rivalry between the legendary Swedish YouTuber, Pewdiepie, and the Indian corporate powerhouse, T-Series, for the title of ‘Most-Subscribed Channel on YouTube’.
Some say that hints of a rivalry started in February of 2017, when Pewdiepie was at 53 million subscribers and T-Series was at 16 million. T-Series’ subscriber count started to skyrocket though, near the middle of December, when they were suddenly at 30 million subscribers. They were getting around 100,000 subscribers daily, thus growing four times faster than the Swedish YouTuber.
Things started to get extremely close, however, near the middle of October 2018, when the Indian music company was around one million subscribers away from taking the throne from Pewdiepie. Then Pewdiepie struck back, and struck back hard, with the release of what is now his most popular video yet: B*tch Lasagna, a diss track to T-Series.
This blew up the internet, and put Pewdiepie’s sub count into overdrive, with his subscriber count rising at almost the same speed as T-Series. By this point, both channels were just shy of 70 million subscribers, which was a giant boost to Pewdiepie’s YouTube channel.
However, the real action didn’t come until a month later, when YouTuber MrBeast published a video saying that he had bought billboards around his city, appeared on radio and TV, and published ads everywhere with the common message of ‘Subscribe to Pewdiepie’. This blew up the internet yet again, with many more people pledging their allegiance to Pewdiepie and joining the fight for YouTube glory.
Many other popular YouTubers, such as Markiplier, Jacksepticeye, Logan Paul and DramaAlert, soon released their own videos in which they also pledge allegiance to the Swedish YouTuber. One of the most notable of these actions, however, came near the end of the year, when a YouTube animator, JaidenAnimations, got to participate in the annual YouTube Rewind.
In it, she animated herself spinning in Pewdiepie’s famous chair. Furthermore, in the background, an animated shelf displayed many infamous moments/memes in 2018, such as Ugandan Knuckles, Logan Paul vs. KSI, finally ending the display with three strategically-placed artifacts that, when read correctly, displayed the message ‘Sub 2 Pewdiepie’. These actions boosted Pewdiepie’s sub count even higher, with him gaining more than seven million subscribers in the month of December alone.
Heading into the New Year, both channels were nearing 80 million subscribers, but T-Series was starting to catch up to Pewdiepie once again, closing the tie even more by being a mere 100,000 subscribers behind. On the day of February 3rd, things almost became hopeless as the Indian company was only 30,000 subscribers behind Pewdiepie.
In this time of desperation, Pewdiepie decided to use the last resort; he never wanted to do it, but he no longer had a choice. He decided to do the unthinkable: stream himself playing Fortnite. This extraordinary action was enough to boost his subscriber difference against T-Series back to 100,000. He said that he was buying time for MrBeast, who had something planned for the upcoming Super Bowl. By the time the Super Bowl came, fans were shocked to see the prankster YouTuber, along with four of his friends, had bought seats on the Rams side of the field, and were sporting sequence t-shirts that read out ‘Sub 2 Pewdiepie’.
How much of an effect that had on the sub count is unclear, but, at the time of writing, both channels are at 84 million subscribers, and the count is getting close yet again with Pewdiepie only being 50,000 subscribers ahead of T-Series. Whether or not that’ll change by the time of this article’s release is unclear, but whatever happens, we have done our best to support the Swedish YouTuber, and can only hope that he will prevail.
SUB TO PEWDIEPIE!