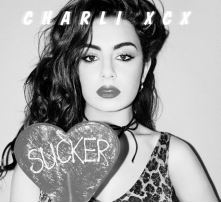 Every now and then, the music industry discovers a hidden gem that spontaneously transforms into a full blown star overnight. That’s what Charli XCX’s transition to the mainstream music world seemed like.

Charli made her way onto the radars of many music listeners ever since her involvement with the smash hit “I Love It” performed by Icona Pop. It didn’t take much longer until she became a household name with the help of fellow newfound star Iggy Azalea. With the help of their extremely catchy mashup “Fancy”, they both rose to the top of the music industry food chain.

Charli had already released countless EPs and two studio albums as well, but her third album titled Sucker marked her first body of work where mainstream music listeners had already had a taste of what she had to offer. From someone who has enjoyed her past work, I was not at all disappointed with this album.

What differentiates Charli from other female pop vocalists is that she doesn’t care about what people have to say about her, nor does she focus on keeping a “squeaky clean” image. With a name like Sucker, you just know she doesn’t intend on holding back.

This album is a celebration of Charli’s rebellious, slightly grungy, slightly bubblegum pop, but fully likeable personality. Charli holds nothing back in her attempt to express her innovative and diverse take on pop music, from the badass/outside of the box tracks “Gold Coins” and “Break the Rules” to the simple yet catchy “Caught in the Middle” and “Famous”. It isn’t trying to be anything but a fun time, which is exactly what pop lovers can’t get enough of. Whether you want to party to this album with a group of friends or on your own, there’s never a dull moment with this set of 13 knockout gems.