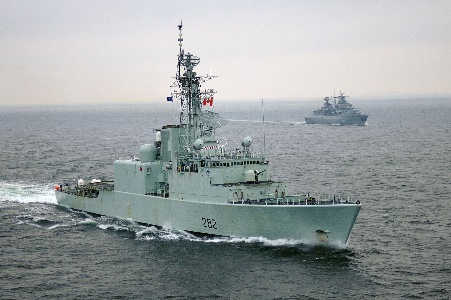 The Unacceptable State of the Canadian Navy

Canada has the most coastline and more fresh water than any nation on earth. Most people would probably think that, because of our abundance of water and coastline we have to patrol and protect, we would most likely have one of the strongest navies out there. And they’re right, we should.

Unfortunately, this is far from the case. After suffering decades of neglect from multiple federal governments, the Canadian Navy is sinking. Canada’s flagship destroyer, HMCS Athabaskan is a sad symbol of the Royal Canadian Navy’s decline. Its engines, decks and hull all need an overhaul and its weapons systems are not functioning properly. In late July, Athabaskan was sent back to Halifax for extensive repairs after being deemed no longer sea worthy. This is right before October when the NATO member countries are set to launch Trident Juncture, their largest military exercise in a decade. Held in the Mediterranean, it responds to an increasingly hostile and expansionist Russia encroaching on the eastern borders of the military alliance (plus challenges to Canada’s arctic sovereignty). Canada was planning on sending the now no longer seaworthy Athabaskan to these exercises. So much for that.

The Navy has been left to rust for so long now that we now have a less powerful force than Bangladesh. In fact, according to The Todd/Lindberg classification system which ranks navies on a scale of one to nine based on things like command and control and resupply abilities, the RCN has dropped to a sorry number six, described as Inshore Coastal Defence capabilities, alongside countries such as Vietnam and North Korea. North Korea! That’s not something that a powerful maritime based nation should be able to say. That’s a drop of three ranks from 2005 when Canada was a rank three navy, which has Multiregional Power Projection, alongside countries like Russia, India and Spain. In other words, the Canadian Navy no longer can operate overseas. It has been effectively reduced to a coast guard. This means Canada can no longer assist in critical global efforts such as aiding the migrant refugees escaping the Middle East to Europe via the Mediterranean, combating pirates off the east coast of Africa.

Plus strictly Canadian affairs such as evacuating Canadians from overseas wars or natural disasters or responding to domestic crises would require aid from other countries.

How will it look if, say, a ferry sinks in Newfoundland or Nova Scotia, and Canada isn’t ready to respond properly and lives are lost while waiting for American aid? The world will see a maritime incompetent nation.

After a period of neglect by Paul Martin’s government, Stephen Harper became Prime Minister and vowed to beef up the navy calling it a “period of darkness” for the armed forces. Now almost ten years later the RMC no longer has any destroyers and has lost its resupply ships, the HMCS Protecteur on the west coast and the HMCS Preserver on the east coast. The state of our navy is undermining Canada’s position of the world stage and Canadians should not accept it.