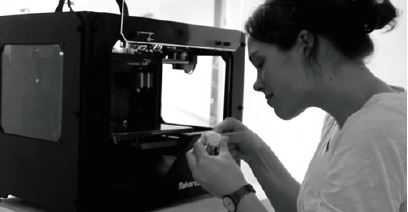 Teleportation might be possible in our lifetime! This machine may not be ready for humans yet it is however a step forward in developing the ultimate transportation method. Since the first episode of Star Trek in 1966, Trekkies all over the world have been mesmerized by the idea of teleportation. “Beam me up Scotty” is not only a worldwide saying, but now takes the name of this new invention due to German scientists having built a working “teleportation” machine. Six scientists from the Hasso Plattner Institute in Potsdam have successfully invented a machine that can rebuild an object from its original place to a different location. This machine, rightly titled “Scotty”, scans and mills away layer-by-layer any object. It acts as a 3D printer as it recreates an almost exact replica. “Users place an object into the sender unit, enter the address of a receiver unit, and press the relocate button,” explains the scientist at a conference at Stanford University. This is not exactly the machine that Star Trek fans imagined. However, it is definitely a sneak peek for what is to come.

Stefanie Mueller, one of the scientists explained: “Even though our current prototype is limited to single- material plastic objects, it allows us to address two application scenarios: (1) Scotty can help preserve the uniqueness and thus the emotional value of physical objects shared between friends. (2) Scotty can address some of the licensing issues involved in fast electronic delivery of physical goods.”

In brief, whenever you send an object through Scotty, it maintains its emotional and commercial uniqueness by keeping only one copy of the object at all times. Items much more complex could not work in this device. Obviously, we could not put our pets into one of them and expect them to come out exactly as they are.

No one would agree to put themselves in one of these machines…as of yet. Maybe one day, in the very far future, it will be possible to teleport ourselves anywhere on earth. But for now, lets just stick to inanimate objects.