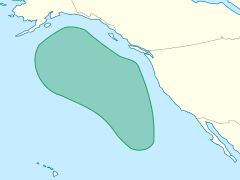 Swimming in the vast oceanic ecosystem on Earth is the 52-Hertz whale. This whale communicates at a deeper pitch than other species, and thus is swimming alone in the oceans. It travels across the Pacific Ocean between the Californian coast all the way north to the Aleutian and Kodiak Islands. It has long been thought to be a lone traveler, but evidence has surfaced to disprove this.

The 52-Hertz whale was first discovered in 1989 by US Navy hydrophones called SOSUS used to detect submarines. When the strange calls this whale emitted were detected, they were put up for study. These songs had a deeper pitch than the usual ones made by fin whales and blue whales. Blue whales tend to range from 10-40Hz while fin whales stay around 20Hz. These mysterious song patterns were also different from other species’ since it was broadcasted more frequently.

Scientists from the Woods Hole Oceanographic Institution (WHOI) have been following this 52- Hz whale to try and learn more about its species. They have not been able to arrive at a definite conclusion but have hypothesized that it could be a malformed whale or a fin\blue whale hybrid. These scientists have been contacted by deaf people suggesting that the whale could possibly be deaf, explaining the different frequency of communication.

Bill Watkins from the WHOI developed a passion for the 52-Hertz whale and followed it for 12 years, recording the whale’s calls and following its migration patterns. He explains that it is shocking and almost unbelievable that only one whale with this condition could exist, but after many years of tracking and recording, he has only been able to find one source for the 52Hz calls.

Christopher Willes Clark from Cornell University was able to record the 52Hz whale in 1993 and concluded that the whale is not as unique as it is presented. He hypothesized that the whale could very well be heard by other species but is simply so odd that the other whales won’t approach it. The whale has also been communicating at lower frequencies as time has passed and was estimated to have calls of 47Hz in 2015. Some blue whales have also been found to communicate at similar pitches.

John Hildebrand of the Scripps Institution of Oceanography in California has been studying whales worldwide and has found that blue whales, amongst others, have been deepening their calls in order to tune out ships’ noises. Hildebrand, however, has found that by deepening their speech, they are actually entering the noisier frequencies, and leaving behind the quieter ones. Another hypothesis that was formulated was that year after year whales compete for a deeper tone of calls. When one goes into a deeper frequency the other one synchronizes itself with that frequency.

Many whale species are thus entering more and more the range of frequency of the 52-Hertz whale, possibly bringing it out of its isolation. It is already thought that blue whales and the 52-Hertz whale have crossed migration.