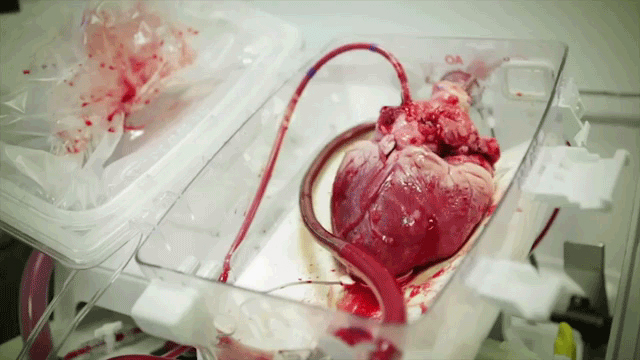 According to the Heart and Stroke Foundation, approximately 1.6 million Canadians are crippled by heart disease or by the effects of a stroke. Since the prevalence of cardiovascular disease is on the rise, the advancement of the science of heart transplants is an important field of study. Thus, the domain is currently undergoing rapid change in order to improve the methods in place.

Originally, in order to transplant a heart, it was necessary to lower its temperature to 4°C. This slows down (but does not entirely prevent) ischemia, the degradation of the organ. The timeframe to transfer a heart from one body to another using this technique is quite small.

Furthermore, this preservation technique requires hearts from brain-dead donors, as opposed to donors that died from a stop in blood flow and heart activity. This is because it is possible to cool the organ within the body of the brain-dead donor, stifling the degradation. This is not possible for those whose blood flow stops, as the heart is immediately damaged by the lack of oxygen, meaning that only a small number of hearts can be donated.

In recent years, TransMedics, founded by Waleed Hassanein, has developed the “Heart in a Box”, which uses an entirely different tactic known as warm perfusion. Equipped with an oxygen supply, a sterile environment and nutrients for the heart, this organ care system (OCS) is warmed up to mimic the body, keeping the heart functioning until the actual transplant. This technique increases the lifespan of the heart outside of the body and a number of organs eligible for transplants.

Indeed, patients dying from a circulatory death could now be eligible to donate their hearts, because the organs could be resuscitated and transferred to another patient’s body. For the U.K., this means that instead of 180 hearts donated per year, the number would increase to approximately 230.

The first successful transplant using warm perfusion was performed on Huseyin Ulucan in 2015. The patient was a 60 year-old man who had suffered a heart attack in 2008. His quality of life has increased immensely as a result of the surgery. He could barely walk prior to the operation, though he was able to walk out of the hospital without any issue after his surgery.

Despite its remarkable advantages, this technological innovation is not without ethical implications. For example, if the heart can be brought back to life outside of the body, is it ethical to give the heart to another patient rather than the original one? Furthermore, after how long is the heart of a patient allowed to be transplanted into another?

The general impression is that this technology will have a tremendously positive impact on the health care system. Many other companies such as Organ Assist, OrganOx and Organ Solution are attempting to develop similar equipment for liver, kidney and lung transplants. These are some of the most commonly transplanted organs and this avant-garde method will surely improve the surgery and the life quality of many patients.